As Police continues to investigate the motive behind demonstration by Makerere University students, Police spokesperson, CP Fred Enanga says that intelligence information indicates that the students could be funded by a third party to engage in disruptive activities at the University.

Unrest ensued at Makerere University from Tuesday to Friday last week when students staged a demonstration against the 15 percent cumulative tuition increment effected in 2018.

The increment which has so far been implemented for 2 years affects newly admitted students.

On Thursday night, students from Lumumba hall led by their Chairman Olwit Emmanuel a renown ringleader of strikes at university, became rowdy and started blocking the roads along Mary Stuart, Lumumba and St Augustine which prompted security personnel to raid some halls in pursuit of the ringleaders.

Police said Monday it was shocked to find non-students some in possession of narcotic drugs, smoking pots and inflammable fluid in the halls actively participating in the riots.

According to Enanga, Police intelligence has since established that the demonstrations could be well coordinated and properly funded by a third party or political actors.

“We are meanwhile actively investigating claims of third party involvement by individual politicians and political groups that are funding and encouraging the students to riot,” Enanga says in a statement

“They are funded through a mobile money point in Wandegeya. Such actors continue to hide behind the guise of freedom of expression, to issue inflammatory statements that are dangerous and harmful to society,” he adds.

He says it is inconceivable that students would consider rioting at night, including taking riots to the neighboring suburbs like Kikoni, Nakulabye and Wandegeya.

Meanwhile, the meeting between the University Management and students leaders on Monday afternoon to resolve the impasse hit a snag when students turned rowdy and attempted to beat the Acting Vice Chancellor, Umar Kakumba, thanks to the Uganda Police which rescued him. 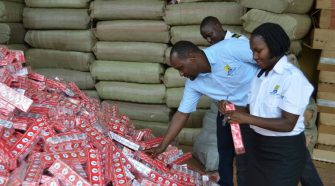