The Makindye Military Court Martial has dismissed an application for bail by detained Senior Police Officer Joel Aguma, who is accused along with others of kidnapping and illegally repatriating Rwandan refugees.

However, the Chairman of the Court Martial, Gen Gutti ruled that Assistant Commissioner of Police (ACP) Aguma lacked substantial sureties as the civilians he presented lacked capacity to ensure that he did not skip bail.

He also noted that if granted bail, Aguma was likely to use his seniority in police to interfere with investigations.

Gen Gutti observed that Col Ndahura lacked permission from the Inspector General of Police, Gen Kale Kayihura to stand surety for the accused as required by the Police code of conduct.

The Court Chairman also noted that Aguma was so influential that he got his senior, Assistant Inspector General of Police, Col Atwooki Ndahura to stand for him surety.

While disqualifying Ndahura as a surety, Gen Gutti noted that he (Ndahura) had participated in the arrest of the accused but had now turned around to stand surety.

He ordered prosecution to ensure expeditious trial of the case and adjourned court to January 16, 2018.

Col Atwooki Ndahura was recently cited in the arrest of Rwandan Refugees who were travelling to Tanzania for prayers. The Police spokesperson, Emilian Kayima confirmed that the refugees are detained by Police. It is not clear when they will be produced in court. Ugandan law stipulates that a detainee shall not be held for more than 48 hours before they are produced in court.

Senior Police Officers Joel Aguma and Nixon Agasirwe were months ago charged over the mysterious kidnapping of a Rwandan refugee, Joel Mutabazi who had been a member of his country’s presidential guard.

Joel Mutabazi was a member of Rwanda’s presidential guard before he fled to Uganda, where he won refugee status.

In 2013, he was illegally repatriated to Rwanda by Senior Police Officers, the military court martial heard.

During the vigil of the late Police Spokesperson Andrew Felix Kaweesi who was brutally murdered on his way from home in March 2017, President Museveni ordered a purge of “criminal” officers. 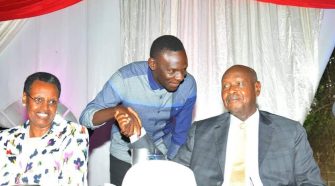