Police is holding one of their own, an Assistant Superintendent of Police attached to Kajjansi Police station for his alleged involvement in repeated robberies in Entebbe.

The Police officer identified as ASP Amutuheire Bright was arrested following an incident that occurred Sunday night at 10pm at Abaita Ababili in Katabi town council in Wakiso.

Gunshots were reported and the Local Defence Unit personal responded to what Police say was an attempted robbery.

According to the deputy spokesperson of Kampala Metropolitan Police, ASP Luke Owoyesigyire, the attempt targeted a one Tom Kisuku, a resident of Busega. He was driving his vehicle Reg UBD 338J.

Kituku, a dealer in fish, alleges that the two suspects had previously robbed him twice and that Sunday’s incident was the third attempt. The suspects have been identified as ASP Amutuheire Bright Police officer attached to Kajjansi Police station and civilian named Musinguzi Richard.

“We have taken up the matter as per his (Kituku) allegations that he was robbed two times and this was the third attempt. The robbery didn’t go as planned because he worked with the area 999 and the LDU commander,” ASP Owoyesigyire said.

The previous robberies took place in Entebbe, according to the complainant and a case was registered at Entebbe Police station under SD Ref 62/29/6/2019.

Owoyesigyire says the two suspects are currently under Police detention. He said the suspected Police officer was not armed at the time of the incident but that he was fully dressed in Police uniform.

Asked what items Kituku alleges were robbed in the previous cases, ASP Owoyesigyire said it is money but could not give an amount, stating investigations will establish details. He also did not reveal details of what Musinguzi, one of the suspects does for a living.

Kituku told NTV Uganda that the duo have so far robbed him money amounting to Shs 13m. He said the first time they took Shs 5m and the second time it was Shs 8m.

He says ASP Amutuheire and Musinguzi have been contacting him, making demands and that he has proof to that evidence. 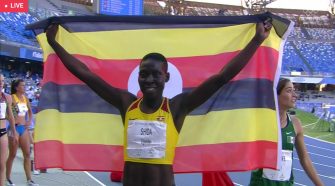