Police in Kisoro have beefed up deployment and quelled a planned protest against the ‘arrest’ of former Inspector General of Police, Gen Kale Kayihura.

The Police regional spokesperson for Kigezi, Elly Matte said in a statement that residents of Kisoro had planned a peaceful demonstration to express their dissatisfaction with the reports about the ‘arrest’ of Gen Kayihura.

Kayihura is born in Kisoro where his deceased father, John Karekyezi hailed from.

“People in Kisoro were being mobilized to demonstrate this morning at 09:00 hours at Mayor’s garden in Kisoro municipality,” Police said in a statement on Thursday.

“They are mobilizing against the arrest of Kale Kayihura and that are heartened by what they termed as unfairness and shameful act to their gallant son,” the statement further read.

According to Police the Kisoro district chairperson, Abel Bizimana had been mobilizing residents using social media to participate in the protest.

Matte says that “police has fully deployed to take charge of the situation and advised the leadership to use rightful and lawful channels to present their greviouses than taking law into own hands”.

Police say the planned demonstration was in contravention with the Public Order Management Act as the relevant authorities (Police) were not notified in advance of the said protest.

“We shall not allow it. Under the Public Order Management law, they are supposed to notify police so we can work out modalities of how peaceful it will be, so we can control those other elements who may have other agenda,” he said.

He condemned the district leadership for making such organizations in disregard of the law.

“It is very illegal for leadership which has people that are knowledgeable to mobilize locals to do things outside the law. If anybody insists in doing so, they will be arrested and charged accordingly,” Matte said.

Gen Kayihura was airlifted from his home in Lyantonde district on Wednesday to the army headquarters in Mbuya, after being summoned by the Chief of Defence Forces, Gen David Muhoozi. He is currently being held at Makindye military barracks.

It is alleged that the former police chief was involved in a number of espionage activities including ordering the transfer of weapons from the Police armoury to Masindi without a record at the Police headquarters.

He is also being questioned over his alleged involvement in the murder of former police spokesperson, Andrew Felix Kaweesi who was assassinated in March last year. 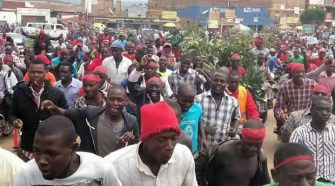