The Uganda Police Force, has come out to downplay media reports indicating that lawyers to the detained former New Vision Journalist turned pastor, Joseph Kabuleta have not been granted access to their client since his arrest on Friday.

Kabuleta was apprehended because offensive communication against the person of the President under Section 25 of the Computer Misuse Act, 2011.

It is alleged that the veteran journalist had grossly been using his social media accounts to post offensive messages referring to President Yoweri Museveni as a gambler, thief and a liar, acts of communication criminalised by the act.

But, on Sunday, a statement by Watchman Ministries, a church he (Kabuleta) presides over indicated that Police had barred his lawyer, Daniel Walyemera, from accessing the suspect who is currently detained at the Special Investigations Division (SID) in Kireka.

The statement however says that the suspect’s doctor and family members were able to meet him.

“It is unfortunate that authorities at SID officials denied Joseph Kabuleta access to his legal team in disregard of his constitutional rights to access to legal representation,” reads the Church statement.

“Beginning Saturday, I was involved in ensuring that the relatives, friends and lawyers get to have access because it was a very straight forward and transparent investigation,” said Enanga.

On when the suspect will be paraded to court, Enanga said that Police is still within the 48 hours limit provided by the constitution to hold one in custody pending investigations.

“The first 24 hours will clock at 4pm today, so that means we still have up to Tuesday tomorrow 4pm to clock 48 hours and thus, anything cam happen in between today and tomorrow,” he said.

The Police spokesperson reiterated that the detectives investigating the charges against the former journalist have completed building up their case.

The file has Monday morning been sent to the office of the Directorate of Public Prosecution (DPP) waiting guidance on whether the facts gathered can warrant his production in court or be released, Enanga added. 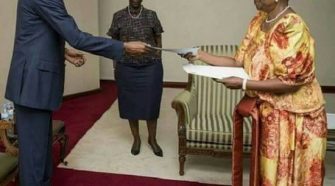