The Uganda Police Force has Monday relaunched the Police Habari Magazine, a platform for Police officers and other members of society to express themselves on different policing activities.

The announcement was made by the Police Chief Political Commissar, AIGP Asan Kasingye while addressing journalists at the Police headquarters in Naguru.

This is the second time the Police Habari Magazine is hitting the Ugandan market having started during the colonial times in the 1930s but changed name later to Mwangaza magazine. It would later be called Habari.

According to Kasingye, the Police management resolved to give a rebirth to the magazine and tasked the former Police spokesperson, SP Emilian Kayima who is the current Head of the Department of Information and Publication in the Office of the Chief Political Commissar, to preside over its publication.

The first publication of the magazine which will be produced on a quarterly basis is already out at a cost of Shs 5,000 and is focusing on children safety.

“You don’t need rocket science to know why we are focusing on children safety. It is because, a few months ago, we launched the crime report and one of the standing out issue was gender based violence especially on children. Whereas crime was going down, specific crimes on sexual gender violence on children and women was going up where Mbale and Lira had the highest cases,” Kasingye said.

As such, Kasingye explains that the department of information and publication found it paramount to put some information on the safety of children.

Kasingye who hailed Kayima for collecting articles from different people on the subject explained that the magazine is intended to address five key areas including promoting Police inter and intra Police communication.

“Ndugu Enanga (Police spokesperson) will tell you that Police officers would like to express themselves on different issues but sometimes they lack a platform where they can be able to do so. It could be on management, administration or how they are handling their own policing areas,” said the former Police spokesperson.

“Police Habari gives them a platform to do that, management will read it with keen interest to see what Police officers are talking about when it comes to their own issues especially welfare, promotions, discipline, salary and wages. This is an opportunity for them to do that other than hearing these things from the grapevine,” he added.

He says it will as well bridge the gap between the Police Force and the public noting that it is one of the ways of carrying out community policing.

The magazine will as well guide Police officers and members of the public on key strategic information that promotes the right to access to researched and accurate information that guides everyone, thus promoting accountability.

Kasingye reiterated that through the magazine, the Police reputation and image will properly be built and shaped.

“Police image is going down and it not helped by what we read everyday but I think people will read what you write about yourself and stick in their minds compared to what others write about you. It is better for us to write about ourselves. People talk on our behalf about our discipline, accommodation but this is a platform where Police officers are going to talk about their own behalf and people will know what they are saying,” he said.

In addition, Kasingye said the Police Habari Magazine enable members of the public to share information on a number of things they have expertise thus promoting communication and writing skills especially among school children.

Meanwhile, media houses which had reporters at the press conference were donated a copy of the first publication of the Police Habari Magazine. 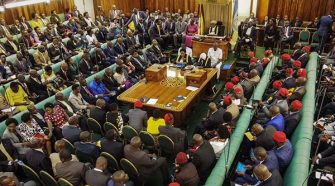