Police has reported a spike in incidents of murder in the two day period of New Year’s Eve and New Year’s Day.

Several cases of murders and alleged suicide acts were registered across the country, in a trend that Police spokesperson, SSP Emilian Kayima termed as unusual.

The others who were attacked and murdered during New Year’s celebrations are; John Bosco Sseremba, 15, Gonzaga Kayemba, 23, Jane Nantale, 41, and an unidentified man suspected to be one of the killers.

Police chief, Gen Kale Kayihura has been camping in Masaka since Monday to oversee security operations and he also visited the families of the deceased.

Kayihura has given assurance that the perpetrators of these murders will be hunted down and apprehended.

In a separate incident, Police has arrested a UPDF soldier who shot and killed a 14-year-old boy named Najib Ngobi during a fracas that erupted during a football match in Busoga.

The soldier, Corporal Oyat Charles attached to Magamama army barracks is said to have discharged the bullet that killed Ngobi after supporters disagreed with the referee’s decision.

Still on December 31, in Rukungitri district, a mob killed 24-year-old Isaac Nuwabiine, a resident of Buyanja sub county after he allegedly stole a pig.

A woman identified as Moreen Namakula was murdered in Kawaala, outside Kampala. Police suspects that the deceased was killed by her boyfriend, a one Rajiv Seguya.

In Manafwa district, Robert Shibuta, 24, was also slain in cold blood using a machete in the wee hours of New Year’s Day after he got into a quarrel with a one Komeyi over a girl.

Police is also investigating two separate incidents in Bududa and Mbale where two people were found dead over what is suspected to be suicide.

Fred Wambozo, 43, was discovered dead in Bududa and police suspects he took his life. Relatedly, a body of Issa Wampongo, 28, a Sheikh was found lying in a river in Nakaloka town council in Mbale district after he drowned.

Kayima said that; “Circumstances surrounding the Sheikh’s death are being investigated. There were no injuries on his body. The postmortem report indicates that he died of drowning.”

He said that there are unconfirmed reports that Issa had mental problems.

“These murders took us by surprise. We have always registered milestones as we receive the new year,” Kayima said.

In the homicides that occured in Masaka, Kayima said that “we suspect that these criminals took advantage of the noises made during the New Year celebrations at midnight to attack their targets”. 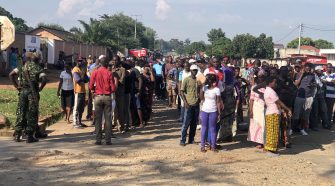