Police have said there was a significant reduction in the reported incidents of crime during the just concluded annual Martyrs day celebrations in Namugongo. The cases reported during the most attended religious event on the Ugandan calendar, dropped from 89 in 2018 to 46 this year.

This represents almost a 50 percent drop

This was revealed in a statement issued by the Deputy Police spokesperson, ACP Polly Namaye.

She said that of the 46 cases, 40 are reports of suspected stolen mobile phones, 2 are cases of impersonation as well as an assault and counterfeit case.

In the counterfeit case, a suspect was arrested selling soda property suspected to be fake, she said.

“We have in custody a total of 11 suspects , while two have been given police bond,” the statement adds.

The traffic and road safety desk registered two serious accidents at Kyaliwajala trading center and along Jinja highway at Namanve .

Sixty four (64) cases of missing children were reported in total to the Police Child and Family Protection Unit desk at Namugongo.

Out of these, 62 children were recovered out of whom, 58 were reunited with their families, 4 are still with our Child And Family Protection Office at CPS Kampala.

“We call upon anyone whose child went missing at Namugongo shrines to contact the child and family protection office at CPS Kampala (0714403295) for assistance, ” Police said.

Police has hailed all the security agencies, dignitaries and members of the public for the unprecedented hard work and cooperation in ensuring the success of this year’s celebration. 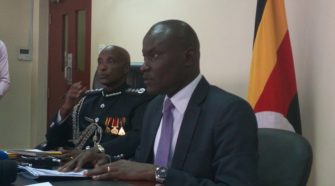