The number of criminal cases reported to Police increased by 3.2% in 2017 compared to the previous year, 2016, according to the latest Annual Crime Report.

The report was released on Wednesday by the IGP, Martins Okoth Ochola, 4 years since the previous Annual Crime Report was issued.

The figures are a mixed bag, with some crimes reducing, for example sex related crimes, while in some other categories, the incidence went up.

AIGP Grace Akullo, the Director of Criminal Investigation and Crime Intelligence who presented the statistics to the press at the Naguru Police headquarters said that a total of 77,675 cases were charged in court in 2017 with 22,936 court convictions. This is in comparison with 75,234 court charges in 2016 and 23,334 convictions.

On the side of traffic incidents, the number of people who died as a result of road accidents almost stagnated at 3500 compared to a 9% increase the previous year.

“Investigating one murder case is a lot of money. So, we need more funding as much as people think we are funded very well. We need to acquire equipment, we need to support forensic investigations,” IGP Ochola said.

The Director of CID, AIGP Akullo also pointed to the understaffing of detectives that carry out investigations which she said has resulted into case backlog. 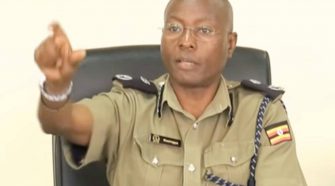