Police in Mbarara district have retrieved a body of 9-month-old baby who is suspected to have been killed and dumped in a pit latrine.

According to the Police spokesperson for Rwizi region, ASP Samson Kasasira, the body of the deceased baby was picked on Wednesday from Surveyor cell, Kakiika ward, Kamukuzi Division in Mbarara municipality.

It is alleged that Medy Byamukama, 28, a resident of the same area reported to Police the case of the disappearance of his 9-month-old baby identified as Paul Ricky.

ASP Kasasira says Police rushed to the scene and mounted a search in a bid to retrieve the body from the pit latrine of a one Prima Aine, one of the aunties to the deceased.

Aine has been arrested to help Police in its investigations.

However, according to Police’s preliminary findings, the suspect confessed that it was her that dumped the baby in the pit latrine.

Kasasira told reporters that the suspect had longstanding misunderstandings with the mother of the deceased relating to domestic violence.

In another development, Police in Ntungamo district have retrieved the body of a Primary school pupil (boy) who was reported missing last month.

The deceased has been identified as Shafat Ayebazibwe, 13, a resident of Kamunyiga II cell, Rutunguru ward, Kagarama town council in Ntungamo district.

ASP Kasasira confirmed that Shafat, who was a pupil of Kamunyiga P/S was reported missing on June 28, at Ntungamo Central Police Station.

According to Kasasira,  the decomposing body of the same pupil was discovered July 14 by teenagers who had gone fishing at Kamunyiga swamp.

“The search was conducted but the pupil couldn’t be recovered until 14th July at about 2200hrs when a decomposing body was discovered at Kamunyiga swamp by teenagers who had gone for fishing and were able to identify it as for one Shafat.” Kasasira explained

Police led by the Ntungamo District CID, ASP Godes Twinamatsiko together with the police doctor Soco visited the scene in the night to retrieve the decomposing body.

However, during the night, at around 11pm, while still at the scene, a mob attacked one Patrick Beinomugisha, 50, whom they suspected of having been behind the murder of the pupil.

Police took Beinomugisha to Itojo hospital for treatment where he succumbed to the serious injuries.

Locals claim Shafat, the murdered boy had earlier revealed that he had seen Beinomugisha breaking into their house.

Kasasira says efforts to have suspects of mob arrested are ongoing. 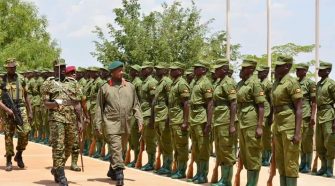 No Salaries for LDUs, Says UPDF