Police says opposition politician and four-time Presidential candidate, Dr Kizza Besigye was arrested because he defied Police orders when he parked his vehicle in the road, disrupting traffic flow.

Besigye, a former President of the Forum for Democratic Change (FDC) was arrested on Monday by Police.

He was proceeding to Nambole stadium where FDC had planned a meeting.

However, his convoy was intercepted in Kireka, near Namboole and Police used tear gas to disperse FDC supporters.

Police has issued a statement explaining why the event was blocked and why Besigye was arrested.

“FDC informed us about the intended celebration and we wrote back to them advising that they should shift the venue but they ignored our directives,” the spokesperson for Kampala Metropolitan Police (KMP) SP Patrick Onyango said.

Police says Besigye “defied Police orders and parked his vehicle in the middle of the road, blocking and inconveniencing other road users”.

His car was towed away and he was taken to Naggalama Police Station.

“At the moment no charges have been preferred against him but investigators are still gathering evidence,” Onyango said.

Police has also refuted reports that were circulating on social media, alleging that a woman was shot and killed today in Kireka township during this fracas.

“This is not true.  No death has been registered in this operation,” Onyango said. 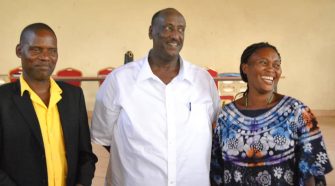