The killers of the Officer in Charge (O.C) of Ayivuni Police Post in Arua district took off with a police gun and 55 rounds of ammunition, Police say.

Corporal Chandwong Santo, was last week attacked and gruesomely murdered by unknown assailants who found him in his room at Ayivuni Police post.

His eyes were plucked out and body found with deep cuts which went up to the jaw on both sides of the head.

Police says the the murderers took advantage of his lone presence at the station since his colleague was away and his room not locked.

CP Fred Enanga, the Police spokesperson, has Monday told reporters at the Police headquarters in Naguru that preliminary investigations point to the possibility that the assailants could have come from the neighbouring Democratic Republic of Congo (DRC).

“This type of murder is not characteristic to our communities here. The two phones that belonged to the victim and police motorcycle were abandoned and we have recovered them,” he said.

Enanga said Police teams from the Flying Squad unit have been sent to reinforce the efforts of the territorial commander in West Nile sub-region.

“We have finger prints from the scene and footprints which actually indicate that one of the attackers was bare footed,” he explained.

The Police spokesperson however reiterated that when they tried to trail the footprints, their Police dog led them to the direction of the DRC (4 km from Ayivuni) and as such “we are working with our counterparts from DRC by sharing intelligence with them and efforts have been put in place to ensure that there is security in the area.” 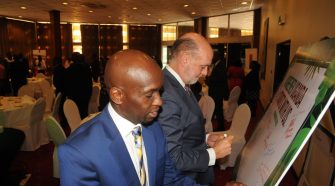