Police on Thursday fired teargas to disperse more than 600 supporters of former Vice President Prof. Gilbert Bukenya for defying Covid-19 guidelines. Prof. Bukenya had organised a political gathering of over 600 people at his home in Kakiri, Wakiso district.

Kampala Metropolitan police spokesperson Patrick Onyango says that Prof. Bukenya used taxis to ferry people to his home without following the Ministry of Health guidelines on controlling the possible spread of coronavirus disease. Taxis are only allowed to carry half of their capacity at the moment.

Police seized three taxis that were ferrying people to attend the political rally.

Bukenya is in the race to represent Busiro North county in parliament.

“Prof. Bukenya used taxis to ferry people without following the Ministry of Health guidelines of carrying half capacity,” Patrick Onyango, the Kampala Metropolitan Police spokesman, said in a

“We all know taxis are supposed to carry half capacity but this guideline was totally violated. It was purely a political rally with campaign posters reading vote Prof.Gilbert Bukenye for MP 2021-2026. At the moment political gathering are not allowed.”

The spokesman says Gilbert Bukenya was advised to abandon the idea but he refused.

“We deployed in and around his home to deter him from engaging in illegal activities,” said Onyango. “He then shifted his plan and rally to Masulita but again we got information about it. We went to Masulita and found people gathering and we had to disperse them using tear gas.”

Police say they impounded three of his taxis that were ferrying people without observing the set guidelines of half the capacity of the vehicle.

Police are now investigating a case of doing acts likely to spread infectious disease which is coronavirus. 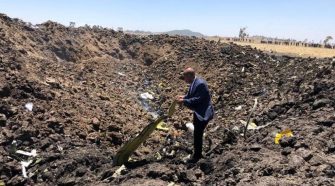