Police is holding a yet to be identified man for intruding on the residence of the Chief Justice, Bart Katureebe in Kampala.

The man said to be in his 30s was shot and injured after he jumped over the fence into the compound of the Chief Justice in Nakasero, Kampala on Sunday afternoon.

Police Spokesperson, SP Emilian Kayima said that the VIP security detail assigned to the Katureebe was prompted to shoot at the man after he defied calls to stop.

“The intruder was pursued and he ran away. Officers shot at him and injured him in the leg,” Kayima told journalists on Monday.

The suspect is currently receiving medical treatment at Mulago hospital.

“He has not been cooperative. He either has a problem or he is stubborn because he has remained silent. But we hope he will explain when he has recovered,” Kayima said.

This is not the first time the residence of the Chief Justice has witnessed a security breach. In March last year, the Chief Justice’s security detail was forced to shoot a man, who attempted to attack CJ Katureebe with an iron bar at his gate as he left his home for work.

Police said that iron bar, spears, arrows and a knife had been recovered from the bag the man was carrying.

On Monday, Kayima reassured that Police will continue to offer robust security to Very Important Persons (VIP) whose lives might face threats. 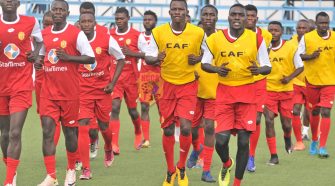