Police shot and killed two unidentified persons suspected to have been part of a criminal gang during what is said to have been an ongoing robbery and attempted kidnapping in Bukoto, Kampala.

Police received a call at around 9pm about a robbery that was taking place at the home of Natif Nicholas located along Matayo close Kigowa II Zone in Bukoto II Parish .

It is alleged that about four people suspected to have been robbers had attacked and seriously assaulted a private security guard and also intercepted the owner of the home Natif Nicholas.

Nicholas had been bundled by the same people, in his vehicle, a Toyota Harrier Reg No UBD 239A , with an aim of kidnapping him and stealing the vehicle.

Police says it dispatched a response team to the scene and on sighting the Police officers, the thugs attempted to knock them (Police) using the stolen vehicle.

“This prompted our officers to fire warning shots and followed it with bullets that fatally wounded the two unidentified thugs . The victim was also  injured in the leg, but currently out of danger, he was later rushed to Nakasero hospital where he is receiving treatment,” Police said in a statement.

The rest of the members of the gang took off and are being pursued by Police..

“We want to greatly thank the family of Natif for the timely reporting of the incident and  for having the contact of their nearest police station”.

“We also want to appreciate the Officer in charge Tuba Police and his team for the quick response when they were called upon and also thank the local leaders for promoting high levels of vigilance in the area”.

Police has appealed to the public to be vigilant while approaching their homes and also seek escort services from the area Police whenever necessary. 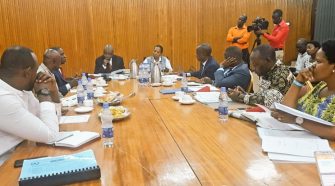 Parliament Committee Starts Probe into Compensation of Traders Who Supplied to S.Sudan