Police has come out to refute reports that there was a break-in at the offices of Citizens’ Coalition for Electoral Democracy – Uganda (CCEDU), by assailants who assaulted a security guard.

On Tuesday morning, Crispin Kaheru, the Coordinator of CCEDU reported an incident at their offices in the wee hours of the night and alleged that the premises located in Nsambya were broken into and a gun stolen from the security guard.

However, when police got at the scene on Tuesday morning, there were no indications of a forced entry since all access points were intact.

It emerged that the gun said to have been robbed was actually taken by the security guard’s supervisor as it had been faulty. He is attached to SGA Security Group.

Police had tweeted confirming that there was indeed no break-in.

“We are at the scene, the supervisor of the security group picked a gun pump action from the security guard deployed at the offices last night,” Police said in a tweet.

“It is alleged that the guard was drunk and now on the run. CCEDU staff have confirmed to us that nothing is missing from their offices,” they added.

Later in a statement, CCEDU said that upon accessing the office premises, Police and the staff of the organization discovered that there was no forced entry.

“Preliminary findings so far indicate that there was no signs of forced access into the CCEDU office building,” read the statement in part.

CCEDU said that no information has yet been obtained on the whereabouts of the security guard, Ronald Kyebambe.

CCEDU is a civil society organization that advocates for the value of integrity in the electoral process by promoting a social and political system that enhances fair, equitable and transparent electoral processes. 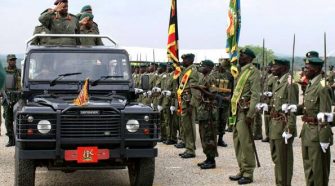 Why Mugabe-Like Downfall is Impossible in Museveni Led Uganda – Mwenda