Police will hold a fresh recruitment exercise after failing to enroll the required 5,000 recruits in the recently concluded countrywide process to get new personnel.

In July, Police announced that it was to recruit at least 4,500 Probational Police Constables (PPCs) and 500 Assistant Inspectors of Police (AIPs) with eligible candidates only ranging between 18 and 25 years as well as being citizens of Uganda.

Academic requirements for PPCs included a Uganda Certificate of Education (UCE) with at least 5 credits including English and Mathematics, while a diploma for the AIPs in the relevant science fields was required.

However, Police spokesperson, CP Fred Enanga, has Monday morning told journalists at the Police headquarters in Naguru, that they were not able to get the target number due to the failure by many of the people who had turned out to present the necessary requirements.

“We had shortages because many of the applicants were slightly above the age requirement. For PPCs, we had put the age requirement at 22, so we had many applicants between 22 and 25 and the same applies to AIPs whose age we had put from 20 to 25. But, we got overwhelming responses but we could not apply our discretion and bend the rules,” explained Enanga

“We have gotten so far about 60% (3,000) of the 5,000 whom we required and we still require about 2,000. So, the Inspector General of Police has instructed that a top up exercise to recruit more slightly about 2,000 recruits takes place at Kibuli Police training school on Friday August 30 and Saturday September 1,” he explained.

Enanga says Police vacancies for AIPs are still available where they require 25 individuals with a Diploma in the categories of health, 123 in ICT and 37 in forensic services.

Police has however relaxed its age and academic requirements in the top up recruitment where age of AIPS has been increased from 20-25 to 20-28 years. That for PPCs has been revised from 18-22 to 18-25 years.

For education requirements on the side of PPCs only a credit in either English or Mathematics is needed. Initially, the requirement was that eligible candidates must have a Credit in both subjects.

Enanga however cautioned the public on individuals who may demand money from potential recruits, saying the exercise is conducted on merit since Police is an equal opportunity employer.

“Those applicants who think that they will come and give bribes, attempt to influence through politicians, intermediary agents Police officers, unscrupulous people are warned and any person found giving such false promises must be reported to the police station,” Enanga said. 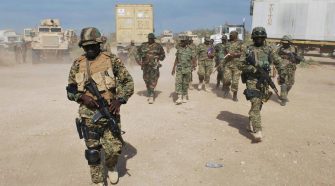