The Uganda Police has said they won’t hesitate taking tougher action against members of the public who disregard the ongoing ban on public gatherings.

Government on March 18 slapped a ban on all public gatherings including suspending school going, entertainments events, church services and weddings with more than 10 people (later amended to 5 people), for a period of one month to reduce the risk of transmitting the Coronavirus.

However, according to Police spokesperson CP Fred Enanga, some people are failing to stay at home, violating the ban on public gatherings of not more than 5 people while others are defying the ban on passenger travel especially on bodabodas and use of private vehicles.

Enanga says in a statement that in some cases, some people continue illegally holding prayers and violating the dusk to dawn curfew including pedestrians who walk past 7pm while some shops in suburbs continue operating past the same time.

The Police mouthpiece says all such people are undermining the presidential directives and risk being being subjected to police action.

“We would like to issue a serious warning to these rule breakers, that we won’t hesitate taking tougher action against them,” wrote Enanga on Sunday.

On Saturday, photos and videos of groups of people in very close contact jogging and working out along the Northern Bypass made rounds on social media.

Police now says all persons jogging along the public roads and highways in groups, especially along the Northern bypass, Muyenga, Munyonyo, Kyanja, Kiwatule, Kisasi, Ntinda and others from Kireka, Seeta, Kirinya, Bweyogerere, Kiira and Kyaliwajjala as well as those who gather at Namboole parking areas should desist from it.

Enanga further cited other incidents where people defied the directives including the recent closure of Kalerwe market and part of Nakawa market due to public health and safety concerns and the impounding of 4 boda boda motorcycles for flouting the curfew.

He said in Buikwe District, police dispersed gatherings of more than 15 persons in several places including where deveral people were found gathered in compounds drinking alcohol and youth playing ludo and pool table in groupings of more than 20 who hurled stones at officers on duty. 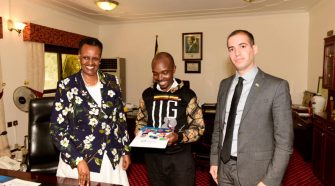