Police has made it clear that use of essential workers’ stickers and Resident District Commissioners – RDC letters will not be allowed during curfew hours.

Senior Superintendent of Police – SSP Norman Musinga, also Kampala metropolitan traffic police commander said police will not spare vehicles and drivers with essential stickers including those with letters of RDC because they have expired.

Musinga said when a ban on use of private cars was lifted, several people drove past curfew time but were presenting essential service stickers and letters of RDCs as an excuse to violate the COVID-19 curfew which runs from 7pm to 6.30am.

“Stickers that were previously issued to essential workers are no longer in use but you are advised to keep them for future purposes. Therefore, the traffic rules and regulations are applicable to every motorist,” said Musinga.

President Yoweri Kaguta Museveni banned public and private transport means on March 30, in order to prevent the spread of COVID-19. However, the ban on private cars was lifted on May 26 thus creating congestion that went up to 10 pm on Tuesday.

Police said yesterday’s traffic congestion on various roads within Kampala metropolitan was because of excitement. Musinga said several people drove to town without any purpose. Police insists curfew time remains 7pm and this time, no driver found on the road beyond 7pm will be spared.

One occupant in SP Nakityo’s car identified as Nabuuma Harriet 40, died on spot while another male adult called Hannington Muyonga was injured during the accident that happened on Entebbe road on Monday night.

Musinga revealed that 281 cars and their drivers were impounded for driving past curfew hours. However, Musinga said police released the drivers and their cars on bond but warned that pardon will not be given to drivers anymore.

“Delay in traffic jam should not be used as an excuse for being caught up in curfew time. Motorists should therefore plan for the journeys well to avoid inconveniences. We shall impound all motor vehicles found driving beyond curfew time and action will be taken against the drivers,” said Musinga.

Other than curfew and the compulsory wearing of face masks, Musinga said traffic rules and regulations on all checkpoints with emphasis on driving without valid driving permit, careless and inconsiderate use of motor vehicle on road, driving while under influence of alcohol and over speeding among other things will be enforced. 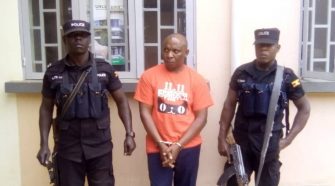