Singer and opposition politician Robert Kyagulanyi (Bobi Wine) has hit at his colleagues in the music industry who sold him out and sided with the ruling government for what he says is “greed for little money”.

The ‘Freedom’ singer and Member of Parliament who is running for President in next year’s elections held the second online concert in the three-month lockdown on Sunday. Contrary to the previous show, this one happened at his One Love beach in Busabala.

He performed live for one and a half hours alongside Nubian Li and an acoustic band, doing a host of his songs, some with political messages and others for entertainment and education.

“The truth is the truth. You might buy it, you might beat it, kick it, or lock it in jail. You might pay people to say otherwise. But at the end of the day it remains the truth,” Bobi Wine, a strong critic of President Museveni, said.

“I want to dedicate this song to the friends I lost because I stuck to the truth,” he added.

He said although they betrayed him, it was a blessing in disguise.

“You my friends turned your backs on me. But if you hadn’t done so, I wouldn’t have known how cheap you are. Had you not sold me out, I would have trusted you with bigger things only for you to betray me,” he went on to sing.

He named ‘Full Figure’ (a former ally to Bobi Wine who was recently appointed a Presidential advisor to President Museveni).

There are many more people, Bobi said, but that he couldn’t name them for the sake of friendship.

Other singers like Big Eye, Catherine Kusasira and Buchaman (formerly in Bobi Wine’s Fire Base crew) have since publicly sworn allegiance to President Museveni.

“As a generation, we must not lose each other to greed,” Bobi said.

He went on to sing a free-style off his ‘Specioza’ track using political lines that projected a future where he will be President of Uganda.

Bobi was later joined by fellow singers King Saha and Dr Hilderman together with whom he sang his political themed song “Tuliyambala Engule’ which speaks of a Uganda where everyone will wear a crown after the war (on Museveni’s oppressive regime).

Sunday’s online show, had over 300,000 and 8,000 views on Bobi Wine’s Facebook and YouTube channels respectively by Monday. 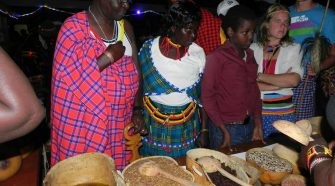