Kenya’s President, Uhuru Kenyatta has signed into law a Bill that will provide tough penalties for anybody that spreads false information electronically.

The Computer Misuse and Cybercrimes Bill, 2018 which was signed Wednesday at State House in Nairobi by President Kenyatta criminalises misuse of social media, unauthorised access, interference, interception and disclosure of passwords.

The Act – which spells out stiff punishment to cybercriminals – provides for timely and effective detection, prohibition, prevention, response, investigation and prosecution of computer and cybercrimes.

Those found culpable of sharing fake news and propagating hate speech will be obliged to pay KShs 5 million or face a two year prison sentence upon conviction.

Stringent punishments will also be preferred against the circulation of phonography at the time when nude photos and sex tapes are quickly becoming a common phenomenon online. A person found culpable of sharing pornography through using social media and other electronic platforms will pay a fine of KSh 300,000 or face 30 years in prison or both.

Kenyatta’s signing comes a month after Parliament of Kenya passed theBill last month but this was met with some opposition from bloggers as well as campainiers of data privacy and press freedoms.

In the new law, government will have the powers to conduct searches and seizure of stored computer data, record of and access to seized data, production order for data, expedited preservation, partial disclosure, real-time collection and interception of data.

Provisions of the same Act establish the National Computer and Cybercrimes Coordination Committee which will be charged with policing cyber related crimes as well as facilitating international co-operation in dealing with computer and cybercrime matters.

Some credit government for enacting the law including legislators after being targeted by the criminals. But others think that its enforcement is likely to be problematic. 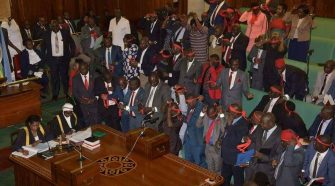