President Yoweri Museveni has called on the people of Sheema district in South Western Uganda and Ugandans at large to protect wetlands.

The President made the call in Kanyamatambara village of Kyangyenyi Sub- County in Sheema district shortly after touring Bushenyi Wet Coffee Processors. He was received on arrival at the factory by Mr. Bernard Bigirwa, son to the late Jack Bigirwa and the late Hon. Bernardette Bigirwa, who were both renowned farmers in the district.  The venture is involved in the cultivation, processing and exportation of coffee. The processing of fresh coffee adds value to the finished product.

“The people who encroached on wetlands should vacate them. Those who went there long ago will be assisted to vacate and shift to alternative areas. The eucalyptus trees planted in these areas must also be uprooted. When a nation has got no vision it perishes. We must protect the wetlands,” he stressed.

Mr. Museveni observed that River Rwizi, which is a major source of water supply to Mbarara Municipality, has lost a large quantity of water due to the activities of residents who have tampered with its tributaries. He called on wananchi to plant trees that are friendly to the hills by following advice from agricultural officers. He also reminded them about the value of cultivating an acre each of bananas, coffee, fruits and pasture for cows adding that they also have good opportunities in the rearing of chicken and pigs for those who are not Muslims. He suggested that those living near wetlands should rear fish as part of efforts to eradicate household poverty.

The President commended the Bigirwa family for not fragmenting the 100-acre land that they inherited after the death of their parents. He further lauded them for realizing that they need to pool resources together to create substantial income. He praised them also for adding value to the family property and said that their act of promoting the coffee processing project has supported over 3,000 coffee out growers in the area. He assured them that the NRM Government is committed to supporting the coffee processing plant.

President Museveni gave a cash donation of Shs. 20 million and pledge Shs. 60 million towards the purchase of a truck for the Bigirwa family coffee project and also assured them that a pump would be availed to the same project.

President Museveni observed that farmers in Brazil harvest 40 kgs of coffee berries per plant, which yields 8 kgs per plant after processing. He, therefore, stressed that there is need for Ugandans to put in more efforts towards achieving production similar to that of farmers in Brazil. He cited the Nyaruzinga Banana project in Bushenyi district that harvests 53 tons per hectare per annum compared to only 5 tons per hectare from local farmers.

Regarding other development programmes, the President revealed that Sheema district would soon receive new road construction equipment. He advised farmers to provide fuel so that local authorities can avail them the equipment for the construction of valley dams to ensure water availability. He said Ishaka – Katunguru road would soon be rehabilitated and that Government would assist wananchi to irrigate banana gardens.

The Minister of Science and Technology, Hon. Elioda Tumwesigye, saluted President Museveni for supporting Ankole Western University and said that the institution has gone a long way in promoting agriculture in the area. He also thanked him for supporting the Bigirwa family in its coffee production.

The Managing Director of Bushenyi Wet Coffee processors, Mr. Bernard Bigirwa, revealed that the processing of wet coffee increases the value of exports. He said they need to be supported with transport. 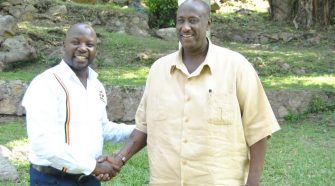