President Yoweri Museveni will Monday afternoon host the country’s national football team, The Cranes, at State House Entebbe, to congratulate them upon exhibiting a great performance in the ongoing Africa Cup of Nations (AFCON) tournament in Egypt.

Despite being knocked out of the round of 16 after losing 1-0 to Senegal, Uganda defeated neighbours Democratic Republic of Congo (DRC) in their opener, held Zimbabwe to a one all stalemate before losing 2-0 to hosts Egypt.

This was the first time in Cranes history to qualify for the round of 16 as well as winning a game and a draw in over 40 years. Uganda only managed a draw with Mali in the previous AFCON tourney, making this year’s performance better.

Also, many analysts have credited the East Africans for having improved greatly in their style of play – they receive the ball, possess it and accurately distribute it. In fact the boys proved that they are no longer an ordinary nation, becoming the darlings of the 2019 AFCON tournament.

As such, the President who was fundamental and supportive to the Cranes throughout their qualification journey by encouraging them as well as offering financial support, has offered to host them at 3pm after arriving in the country. The team left Egypt on Sunday and arrived in Uganda on Monday morning.

This is not the first time the Head of State is hosting the national football team, days to the Lesotho match at the qualification stage in Namboole in which Uganda thumped them 3-0, thanks to Emmanuel Okwi’s brace and Farouk Miya’s goal, the President invited Cranes to State House, where he revealed that he was critically following the team.

He also announced an offer of Shs 200m on top of providing a chartered flight to the team to travel to Maseru, Lesotho for the return leg against the hosts.

Meanwhile, FUFA and the team technician, Sebastian Desabre over the weekend parted ways on a mutual agreement and it remains unclear whether he (Desabre) will be returning alongside the team to bid farewell to the country and the fans. 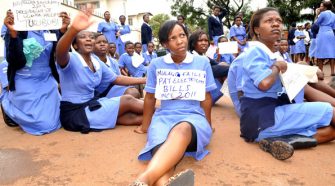