Parliament has voted to reinstate the Presidential term limits, twelve years after they were scrapped through a constitutional amendment.

The decision follows the passing on Wednesday of the Constitutional Amendment Bill No. 2 which sought to among others remove the Presidential age limits.

The two five-year term limitation for President which had been scrapped in 2005 has been reinstated and entrenched in the constitution. This was after Budadiri West MP, Nandala Mafabi moved a motion to restore the term limits, at last minute and was seconded by majority of the MPs.

Many viewed this as a trade off by the ruling NRM party to the opposition in exchange for passing of a law to have age limits scrapped.

Majority (315) of the MPs voted in support of the Bill while 62 voted against it and 2 abstained.

The passed Bill will now be sent to the President for assent.

The vote during the third reading of the Bill came after a tedious debate which lasted three days. The debate was characterized by anxiety, chaos and confrontation between the ruling NRM party and the opposition.

Among other amendments passed on Wednesday, Parliament has extended the tenure for Parliamentarians and elected Local Government leaders from 5 years to 7 years beginning with the current leaders.

But in the case of the President, this will require a referendum.

Different political leaders and legislators reacted to the law reforms differently. For those on the opposition side who are the minority in Parliament, the amendments aroused disappointment.

Prime Minister, Ruhakana Rugunda termed the amendments as “a package full of democratic gains”, saying the ruling NRM got more than it expected.

“This is a victory for Parliament and it shows that Uganda has sorted all political issues. We can now embark on service delivery,” the Prime Minister said.

The Minister of Justice and Constitutional Affairs, Kahinda Otafiire said that the amendments considered the systems in the East African Community.

“In their wisdom, they [MPs] have chosen to harmonize with other countries in East Africa and also decided to extend the term of MPs to reduce the burden on the tax payer,” he said.

But majority of the opposition MPs were not impressed by the laws. Some have in fact said they will proceed to court to challenge the amendments.

Aruu county MP, Odonga Otto said; “I am disappointed. We tried everything from martial arts, debate and voting but we failed. But this should be an eye opener that it wasn’t wise for Ugandans to elect a Parliament that is 90% NRM”.

On whether the Presidential term limits are a win for the opposition, Otto regarded this as useless.

“Term limits are useless. Museveni is still available until 2037. We have been duped and Museveni is here to stay. You can’t be excited for restoration of term limits,” Otto said.

“We shall fall back and restrategize. We are going to court even to the level of Supreme Court. We shall not be defrauded. It is evil and I can’t be proud of benefiting from this,” a bitter Tinkasimire said after the lengthy session.

But Kilak South MP, Gilbert Olanya said the opposition had won even in their small numbers. He noted that opposition MPs had represented the views of Ugandans.

He was however concerned with the worrying trend of bribery which he said has become the basis upon which Parliamentarians make laws.

Regarding the extension of MPs’ tenure in office, Olanya said it was selfish and unnecessary. 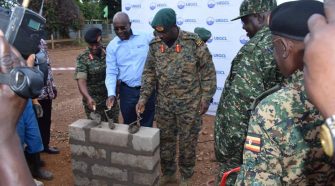