The Prime Minister, Livingstone Ruhakana Rugunda has called upon Ugandans to disregard claims by the Minister of State for Investment and Privatization, Evelyn Anite to the effect that there are mafias in government.

While addressing the media on Monday, Anite told the country that her life was under threat at the hands of mafias whom she said are well placed in government.

The Minister told reporters at her office that the so-called mafias are determined to eliminate her following her appeal to have government-owned Uganda Telecom Limited (UTL) audited.

Asked to reveal the mafias, Anite said that they are well know to the media, adding that they are the very people that have been blocking audit into the operations of UTL.

During the Minister’s question time on Thursday, Kisilo County MP, Elijah Okupa asked the Prime to explain whether he is aware of any mafias that exist in government as claimed by Anite.

“This week, the media has been awash with reports made by our colleague Anite that the mafias who work in government want to kill her. Can you assure this country that you don’t preside over a mafia government?” Okupa asked.

In response, the Prime Minister noted that the claims are baseless since he is not aware of any such groups in government as well as in the country.

“Like Ndugu Okupa, I have seen this in the media. However, I am not aware of the existence of any mafia group in government of Uganda,” Rugunda responded.

According to Wikipedia, a mafia is a type of organized crime syndicate whose primary activities are protection racketeering, arbitrating disputes between criminals, and brokering and enforcing illegal agreements and transactions. 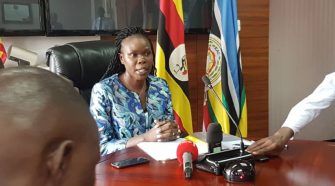 Anite Claims ‘Mafia’ are Threatening Her Life, Vows to Die Fighting for UTL