Kenya’s opposition figure, Raila Odinga has urged his supporters to refrain from going to work on Monday calling it a time of mourning the people who were killed during post- election protests. Odinga who lost last week’s Presidential election to incumbent Uhuru Keyatta accused the new government of killing his supporters.

On Sunday, Odinga addressed a gathering of his supporters in Kibera, a slum in the outskirts of Nairobi.

“This is a failed regime that is resorting to killing people instead of addressing the real issue. The vote was stolen. There’s no secret about that,” he told about 4,000 people who had rallied in Kibera.

Odinga said; “The Jubilee party have spilt the blood of innocent people. Tomorrow there is no work.”

Scattered protests broke out on Friday night in the wake of the announcement of Kenyatta as President-elect.

At least 16 people have since been killed according to news aganecy AFP. One of the victims was a nine-year-old girl who was reportedly hit by a stray bullet in Mathere Nairobi’s Mathere slum.

However, the Kenya National Commission on Human Rights placed the number of those killed by security agencies in protests since polling day at 24.

The protests which majorly occured in opposition strongholds are believed to have been fueled by allegations by National Super Alliance (NASA) leaders including Odinga that the electoral body had rigged the election.

Later on Sunday, Odinga took to Twitter to further hurl accusations on Kenyatta’s Jubilee party as being responsible for the killings.

“As we mourn Kenyans killed by Jubilee mandated death squads, let’s observe tomorrow as a day of mourning for the fallen patriots,” he tweeted.

He added: “For weeks before 8th August, NASA warned the world of Jubilee killer squads set to be unleashed after the polls. This wasn’t taken seriously.” 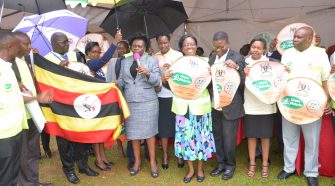