The Chief of Defence Forces, Gen David Muhoozi has explained that the military could not be restrained from arrest of suspected criminal elements in the rogue Boda Boda 2010 due to procedure.

His comment comes weeks after the Chieftaincy of Military Intelligence (CMI) led operations that arrested 40 people including the leader of Boda Boda 2010, Abdullah Kitatta and several other members of the group for allegedly masterminding the brutal killing of former Case Hospital accountant, Francis Ekalungar and a host of other crimes in the city.

CMI operatives later recovered the vehicle that Ekalungar was driving prior to his death in one of the compounds of a member of Boda Boda 2010, a group dreaded by many.

Kitatta and 12 other suspects were on Monday arraigned before the military court and charged with unlawful possession of military stores and failure to protect war material, and later remanded to Kigo prisons.

The crackdown on the criminal group by the military has since raised questions on the competency of the Police in combating crime with some saying that CMI’s lead role in the operations was evidence of the failure of police. Some media reports touted alleged feuds between the military and the police force.

However, Gen Muhoozi refuted this narrative and said that the military acted on credible intelligence of a security threat which could not be frustrated by procedure.

“We [army] acted on reliable information following a tip off. We acted for the security of our country,” Gen Muhoozi told SoftPower News on Wednesday morning.

“Such an operation for the security of Ugandans should not be constrained by procedure,” the Chief of Defence Forces added.

He said that Police later joined the operations and that it will continue to execute its constitutional mandate.

“The military taking over arrests will not be an everyday thing. We shall only intervene when need arises,” Muhoozi said.

Some of those arrested face charges of obstruction of justice after they attempted to prevent the military from arresting suspects. They hurled stones at operatives while others blocked roads during a CMI operation in Kyengera in which the first members of Boda Boda 2010 were arrested.

Gen Muhoozi said that such acts of obstruction of justice can not be allowed to happen in Uganda, as nobody is above the law.

Traffic Jam Shouldn’t be Used as an Excuse to Drive During Curfew, Cars Will be Impounded – Police 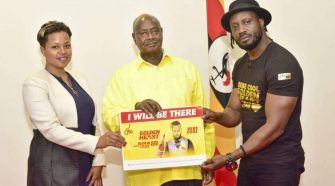