The Vice Chancellor of Makerere University, Prof Barnabas Nawangwe has on Tuesday appeared before the Parliament committee on Rules, Privileges and Discipline to testify against the Mityana Municipality MP, Francis Zaake accusing him of treating him inhumanely nearly beating him.

On November 9, Speaker of Parliament, Rebecca Kadaga cautioned Zaake over poor conduct and committed him to the Rules, Privileges and Discipline Committee for investigations after he nearly beat up Prof Nawangwe.

Nawangwe had appeared before the Education committee that was investigating the circumstances around the Makerere University Student’s strike against tuition hike.

The Mityana municipality legislator is accused of misbehaving during and after the committee proceedings. He is faulted for intentionally insulted and nearly assaulted Professor Nawangwe.

Appearing before the committee of Rules on Tuesday, Nawangwe said the manner in which Zaake was asking him questions was disrespectful to him and was only aimed at undermining him.

The Vice Chancellor said Zaake’s conduct towards him left him traumatized and he has since feared appearing before any other Parliament committee for fear of being treated inhumanely.

He said this was the first time he was treated in such an impolite manner in the many times he has appeared before Parliament committees.

Nawangwe said Zaake warned him against his attitude saying if he doesn’t change, he would make sure there was no end to the constant strikes at Makerere University.

“The circumstances in the room after the meeting, I can say, I was in a dangerous situation. After the meeting when I bade farewell to the committee Chairperson, I saw Zaake coming towards me continuing to throw all kinds of insults at me,” Nawangwe narrated.

“The picture that went viral when he was pointing a finger right to my face, that is when other colleagues in the committee room shouted to him to stop because they thought he was hitting me, this was out of the ordinary.”

The committee is scheduled to meet with Zaake on Wednesday morning to hear his side of the story.

Appearing before the committee on Monday, the Education Committee Chairperson, Jacob Opolot noted that Zaake’s actions might have been premeditated because all his efforts to restrain him yielded no results.

“I will say that Zaake’s conduct was premeditated. I realized that something nasty was going to happen, he was so fully charged, shouted at me and called me a dictator yet I actually gave him more time to contribute in the meeting,” Opolot said. 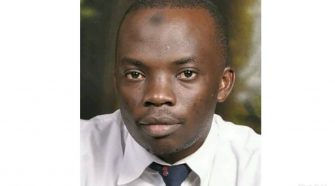