The Governor of the Bank of Uganda, Prof Emmanuel Tumusiime Mutebile has cautioned government against the idea that oil will be the major source of public revenue which he said could expose the economy to major risks including recession.

Mutebile was Monday speaking at the launch of the Regional Economic Outlook report released by the International Monetary Fund (IMF) at Sheraton Kampala Hotel.

According to the findings by IMF, while Sub-Saharan Africa’s average growth is set to rise to 3.4% in 2018 from 2.8% in 2017, the situation is brim for the oil producing countries. The outlook indicates that oil countries are still dealing with the legacy of the largest real oil price decline since 1970, with growth well below past trends and rising debts.

In reaction to the assessment of the region, Mutebile said that the good performance of Uganda can partly be explained by the fact that it is not so dependent on export earnings of oil and minerals whose prices have collapsed in recent years affecting real growth.

He said that the presumption that future oil will be magic wand for Uganda’s economic challenges is precarious since the oil prices are unpredictable and never stable.

“Countries that did this mistake including Nigeria, Chad, Angola all suffered recessions when commodity prices fell sharply,” he said.

Uganda is currently at a critical stage to develop the oil and gas infrastructure (construction of the oil pipeline from Hoima to the port of Tanga in Tanzania and the oil refinery) as it readies for production of its first commercial oil in 2020.

IMF notes that despite recent increases, oil prices remain too low to balance the budgets of most oil exporting countries.

“The break-even oil price, the theoretical price at which the budget is balanced for a given level of production, declined between 2014 and 2017 for all Sub-Saharan countries except Nigeria and Gabon,” says IMF in its assessment. 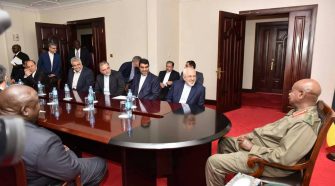