After being voted the most beautiful woman in Africa in the recently concluded Miss World contest, Quiin Abenakyo has been applauded for using her position to promote the positive image of Uganda on the global stage.

The chairperson Uganda Tourism Board (UTB), Daudi Migereko said that Abenakyo’s performance on the world stage has made Uganda proud as a country through her excellent performance.

According to Migereko, the publicity got from Abenakyo during the Miss World contest in China is a plus for the country.

“She put up an excellent show and as a country, we are bound to benefit immensely as a result of the publicity Uganda has earned,” Migereko said.

“The image of the country has been put on a different trajectory,” he said.

Rebecca Kadaga, the Speaker of Parliament pledged her support for Abenakyo and her campaign against teenage pregnancies in Uganda.

“I am in much support of her campaign on teenage pregnancy. I will help to propagate it because it is very vital in achieving Sustainable Development Goals,” Kadaga said.

Sylvia Namutebi, the Miss Uganda 2011 who also doubles as project coordinator Miss Uganda project said Abenakyo’s win was out of a concerted effort. She described it as a great milestone which has plaved Uganda in global spotlight for the right reasons – beauty, purpose and cause.

According to Namutebi, Abenakyo saved Uganda the million of Shillings that would have been spent on promoting Uganda, and instead did it in just a matter of days. For this reason, she says the reigning Miss Uganda deserves to be cherished.

“We indeed expected alot in this year’s competition and we kept on promising our sponsors, partners and the press to expect the best from us and here the promise is met”.

Miss Uganda is expected back in the country in the next five days since she has to attend the ball dinner for all contestants, do press interviews and have a tour of China. 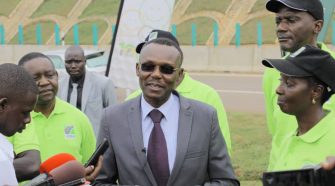