Rapper GNL Zamba has returned to Uganda to promote his forthcoming album ‘Nsimbi’ due to be dropped on June 22. The Baboon Forest Entertainment founder has been in the U.S for over three years now where he began a new life with long time white girlfriend, Miriam Tamar.

The two who live in California have a baby together and recently, they chose to put their efforts together on a music album project. They announced they had formed a music duo ‘Nsimbi’ which also happens to be GNL’s real name. Their maiden album is also titled ‘Nsimbi’.

In Luganda, ‘Nsimbi’ means ‘money’. More like ‘a duo with an album that is about to rake money’.

Nsimbi has songs in Luganda, Lingala, English and Kiswahili. The album is based on Kiswahili proverbs and is rich in African traditional sound fused with a modern acoustic feel. The album touches subjects of cross cultural dialogue, unity and exploring.

Anyway, after a long time, characterized by the rapper opening a clothing line and landing a role on a movie alongside actor Darron Lee Campbell, GNL is back home where the music story began.

We understand he arrived in Uganda about 5 days ago.

On Tuesday, the rapper posted a video on Facebook driving through Bukoto which triggered excitement among many of his fans.

The following day, the ‘Kikankane’ singer posted a photo of him dressed like the Egyptian Pharaoh with a writing ‘Zamba The Great’. Whether that is to suggest that he is back to reclaim his place in the Hip Hop game, Ugandans can only wait till they get a feel of his album.

Weeks ago, he released the ‘Vibranium’ freestyle in response to the ‘Who is Who?’ Hip Hop freestyle battle sparked by rapper Fefe Busi. GNL’s Vibranium was almost like a reminder to new rappers that he was and still is a force to reckon with.

Recently, he also revealed he will be releasing two albums this year and a music concert. Looks like the break is over for the weaver of Luga Flow. 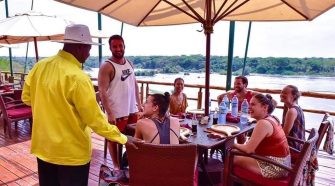