Controversial Jinja Resident District Commissioner (RDC) Eric Sakwa insists that he has to get access to his office despite the President sending him on forced leave for two months.

Sakwa was arrested on April 24 and charged with manslaughter, robbery and malicious damage of property.

Prosecution alleges that between March 22 and April 17 this year at Lwanda Village in Jinja District, Sakwa unlawfully caused the death of Charles Isanga, a businessman in the area.

He is jointly charged with two others who include Bazimbyewa Bumali alias Chris Umar Dindodi, 19, a mechanic and Mohammed Simba alias Meddie, 31, and a businessman in Jinja.

Prosecution further claims that Sakwa, his alleged accomplices and others still at large stole Shs 80,000, three crates of beer, eight trays of eggs, sachets of waragi and soda all valued at approximately Shs429,000, still the property of the said Isanga.

He was however granted bail by Jinja Chief Magistrate, Jessica Chemeri on April 29 and released Kirinya prison where he had been remanded.

However, days later on May 4, a letter written by Kakande Yunus, Secretary in the Office of the President addressed to Sakwa stated that the controversial representative of the President had been interdicted on grounds of the charges he is facing.

“Following your arrest on charges of Manslaughter and others, you have consequently appeared before Court and you were remanded to Prison on 24th April, 2020,” wrote Kakande.

“… you are hereby interdicted in your position as a Resident District Commissioner and therefore barred from exercising the powers and functions of your Office with immediate effect,” he added.

Kakande would then as Sakwa to handover to the District Internal Security Officer of Jinja District whom he said would temporary perform the responsibilities of the RDC.

But in a turn of events, Sakwa through his lawyers, Nyote and Co advocates and Alaka & Co advocates, sought an injunction from nullifying his interdiction, which they successfully secured thus staying his stay in office.

In the injunction, court ordered the Attorney General and Hajji Yunus Kakande, refered to as the respondents, and their agents against evicting Sakwa from his office of RDC Jinja District and that he continues executing his duties unhindered.

For this period, when he will be in office, court also ordered that he gets all his emoluments and other benefits unlike in the interdiction order where he would only earn up to not more than a half of his monthly salary.

However, President Yoweri Museveni, who is his appointing authority, last week directed Sakwa to immediately vacate office and return only when the allegations against him are fully investigated and disposed off.

“It is good that Sakwa got bail. Let him go on leave for two months and work with the Director of Public Prosecutions and court to get the facts and conclude the case. This is not a political matter for dialogue. It is a serious criminal allegation. If the accusers of Sakwa are lying, it will boomerang on them,” said the President in a statement.

But on Monday May 25, Sakwa through the same lawyers, Nyote and Co advocates and Alaka & Co advocates, wrote to the District Internal Security Organisation asking to be granted access to his office.

“Our client has since (time of interdiction) obtained an interim order stopping the handover or any interference with his functions and a copy of the same was served upon the Attorney General and Hajji Kakande Yunus,” writes Sakwa’s lawyers.

As such, the lawyers have given the District Internal Security Officer only one day from May 25 to allow Sakwa access to his office or else they commence proceedings to arrest him for contempt of Court.

The letter by Sakwa’s lawyers does doesn’t anywhere cite the forced leave the Client was sent to, by the appointing authority. 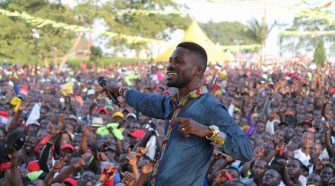 Music is a blessing that unites us, says Bobi Wine