The Uganda Red Cross has said the Rwandan pregnant woman who died on Wednesday at the Uganda-Rwanda border at Kyanika breathed her last as Red Cross volunteers attempted to save her life.

Police at the Kyanika-Rwanda border said Wednesday it is investigating circumstances under which the pregnant woman mysteriously died.

According to the Police spokesperson for Kigezi Region, Elly Matte, the deceased has been identified as Mukarugwiza Elizabeth aged 37. She was a Rwandan national. She was wife to a one Hakizimana Dan, a resident of Kinigi village, Nyamirima parish, Musanza county, Musanza district in Rwanda.

Read More: Rwandan Pregnant Woman Dies in Uganda After She Was Pursued by Rwandan Security

The death of Elizabeth occurred Wednesday today at around 10:30am at Rukoro village, Nyakabingo parish, Chah county Kisoro district.

Red Cross has issued a statement saying they were approached by a Police officer to run and offer first aid to a woman who had collapsed.

“We were approached by a police officer to run and give first aid to a woman who had collapsed at Kyanika boader,” read the statement in part.

“When we reached the scene, she was unconscious. Few minutes in the process, she breathed her last,” said Ronald Kanyerezi, Uganda Red Cross Branch manager – Kisoro (Kyanika boarder).

“Uganda Red Cross Volunteers deployed at the Kyanika border (Uganda and Rwanda/DRC) are on duty to screen people entering Uganda for Ebola.

“It is alleged that the woman was running, being chased by security officials from Rwanda who wanted to stop her from crossing to Uganda. In the process, she got tired and collapsed,” added the statement.

“In an effort to fulfill our mandate of saving life, it is unfortunate that she couldn’t make back to life. We managed to cover her body in the spirit of observing dignity. May her soul rest in peace.” Kanyerezi added.

The Police statement read; “The deceased was pregnant and was being ran after by Rwandese Army/Police as she was crossing to Uganda with others coming to buy food stuffs through the porous border line”.

“She fell on Ugandan land and died instantly”.

The body of the deceased is still at Kyanika police station pending postmortem.

Matte said consultations are ongoing between the Resident District Commissioner of Kisoro and his district security team together with the Rwandan security team at Kyanika border on how to handover the body to the relatives. 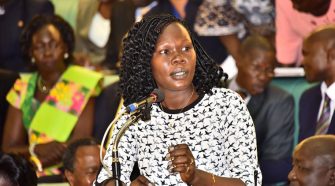