Former U.S President Barack Obama has made an appeal to Kenyans ahead of the much anticipated general elections on Tuesday to observe peace and desist from ethnically laced violence.

Obama who has been out of the public realm for about seven months since he left the White House in January issued a statement a day to Kenya polls calling on leaders in his ancestral home to respect the will of the masses.

“I urge Kenyan leaders to reject violence and incitement; respect the will of the people; urge security forces to act professionally and neutrally; and work together no matter the outcome,” Obama wrote in the statement.

Obama’s father Hussein Onyango Obama had his roots in Kogelo, West of Kenya, making him (Obama) arguably the most influential figure to come from the East African country.

Therefore, at such a time, his message is one that could be viewed with great significance.

In the aftermath of the 2007 elections in Kenya, ethnically motivated fights broke out which resulted into deaths of around 1,200 people and more than 500,000 displaced.

Obama’s message further read; “I urge all Kenyans to work for an election – and aftermath – that is peaceful and credible, reinforcing confidence in your new Constitution and the future of your country.

“The ultimate responsibility is in the hands of the people of Kenya, who know more than any needless pain and agony thousands suffered as a result of the crisis in 2007,” he added.

Obama noted that Kenya has come a long way in the last two decades making remarkable strides including a peaceful transition of power in 2002 and embracing a new constitution.

“I hope you will choose to build on this inclusive spirit to further advance the gains that have been made, rather than putting them at risk,” Obama said, reiterating an appeal he sounded during his historic visit to Kenya in 2015. On that visit, he urged Kenyans to reject the politics of ethnicity and tribes, and instead embrace inclusive democracy.

“The choices you make in the coming days can either set Kenya back or bring it together. As a friend of the Kenyan people, I urge you to work for a future defined not by fear and division, but by unity and hope,” the statement read. 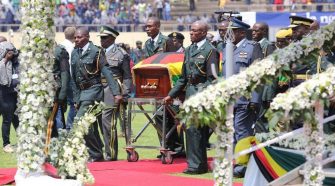