International news agency, Reuters has asked the Ugandan army to ensure the swift and transparent probe into the matter in which a Reuters journalist working in Uganda was brutalized by the military personnel.

James Akena, a photojournalist working with Reuters was filmed being severely beaten by soldiers of the UPDF who had been deployed to quel riots in Kampala.

Akena was covering the riots last week which were protesting the detention of singer and Kyadondo East MP, Robert Kyaguanyi alias Bobi Wine. He sustained injuries to his head, spine and hand, and was hospitalized at International Hospital Kampala.

Three other reporters including Ronald Galiwango and Juma Kirya of NTV and Alfred Ocwo a photojournalist working with The Observer newspaper were also brutally arrested by security personnel, detained and forced to have camera footage deleted.

Now, Maggie Fick, the Bureau Chief for Reuters in East Africa has written to the Chief of Defence Forces (CDF), Gen David Muhoozi asking that the process of investigations by the Ministry of Defence into soldiers involved in the beating of Akena and other journalists, be done transparently.

This week, the army spokesperson, Brig Richard Karemire said that Gen Muhoozi had ordered the arrest of the individual soldiers that perpetrated the rights abuses.

“UPDF wishes to express its displeasure over such behavior by those individuals and as a result, the CDF has ordered for their arrest and punishment,” Karemire said in a statement.

The army also apologized to the victims of the brutality and said that it is still committed to fostering a strong partnership with the media.

“Reuters welcomes the Ministry’s promise to investigate the soldiers’ use of physical violence and intimidation against journalists engaged in lawful newsgathering activities,” Maggie Fick said in her letter.

She said that “Reuters calls upon the Ministry to ensure this investigation is conducted swiftly and transparently”.

Reuters has further called upon the Ministry of Defence to guarantee the right of journalists to cover newsworthy events in Uganda without risk to their safety or security.

The August 24 letter is also copied to the government spokesperson, Ofwono Opondo as well as the foreign correspondents’ Associations of Uganda and East Africa.

“The intimidation of news media is inconsistent with the Uganda’s constitutional commitment to a free press,” Fick said. 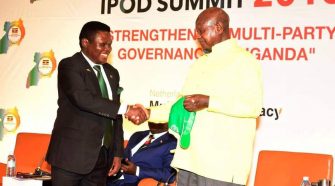