The Commission Chairperson, Med Kaggwa made a submission on the state of sexual violence before the Parliamentary select committee investigating sexual violence in institutions of higher learning.

Kaggwa noted that delays in the justice system hamper delivery of justice to victims as many cases take long to be concluded.

He also pointed out that the absence of a witness protection law hinders access to justice.

In addition, Med observed that there is no clear national policy to protect students from sexual abuse in schools hence his plea that the Education Act 2008 be amended to allow pregnant students continue with their studies.

“Parliament should push for government to implement the clause in the Maputo protocol that provides for pregnant girls to be allowed space to continue with their studies despite becoming pregnant while at school,” Kaggwa said.

While detailing the Commission’s findings, Kaggwa noted that the vice was high in government schools at 59.6 percent.

He told MPs that the most affected were students aged 16-18 while the main perpetrators were male teachers representing 67%.

He observes that cases that are criminal in nature are usually treated as disciplinary cases instead of slapping harsh punishments to the perpetrators of sexual harassment.

“Most institutions of learning don’t have clear guidelines on sexual abuses and cases that are criminal in nature end up being treated as disciplinary cases instead of referring them to Police for purposes of prosecution.”

“The Education Act should be amended to provide for accommodation of pregnant students and support them in completing their levels of education.”

The Select Committee chaired by Gomba West MP, Robinah Rwakojo is continuing to receive other witnesses and will later report to entire Parliament for a decision to be taken on the matter at hand. 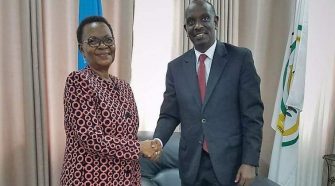