Nigerian singer, Paul Okoye (Rude Boy) who is in Uganda for a show on Valentines Day says he will collaborate with Weasel.

Rude Boy alias King Rudy arrived in Uganda on Wednesday with his band. They will be performing at a show at Lugogo Cricket Oval on Friday. The same show will feature Ugandan top artistes – Bebe Cool, Kenzo, Cindy, Sheebah, Winnie Nwagi, Spice Diana, John Blaq among others.

The Nigerian singer, formerly the half of singing duo P Square paid tribute to Mowzey Radio at a press conference in Kampala on Wednesday. He was emotional about the loss of one of Uganda’s celebrated singers and confessed his obsession with the song ‘Nakudata’ by Radio and Weasel which he sang before reporters.

He recounted his first encounter with Radio and Weasel when P Square were in Kigali, Rwanda for a concert.

“I met Radio during a concert in Rwanda. We (P Square) were there for three days and every radio station we went to, we kept hearing this song. So I asked one of the presenters ‘Who is this guy’?”

When he learnt about Mowzey Radio, Paul made a quick search of Radio and Weasel’s music online where he watched their videos and was impressed.

He then contacted them to fly to Rwanda the next day so they could share the stage with P Square.

“I spoke to my Management, told them to get them (Radio and Weasel) a ticket and hotel. I said I wanted these guys on stage. And they came”.

In a separate interview, King Rudy said it was during that same visit (in Rwanda) when he learnt that Radio and Weasel intended to do a song (Zuena) using a track very similar to the one P Square had used in their song ‘No One be Like You’. According to Paul Okoye, there was no need to seek permission and he gave approval for ‘Zuena’ to be recorded because they were African brothers.

Rude Boy says he reached out to Weasel informing him he was coming to Uganda, and that he is willing to support him “as a brother”.

“I took my time to call Weasel yesterday and told him I’m coming to Uganda. And I told him, ‘Whatever you need, I’m there for you as a brother. I miss your brother too. If you want us to do a song, feel free to call me’,” Rude Boy said during the press conference.

“And I’m doing that because he’s a friend”.

He says Weasel has already sent him three songs on which they can collaborate, and that he particularly loves two of them.

On Thursday, Weasel posted a video of him with Rude Boy and producer Washington at the hotel where the Reason with Me singer is residing, teaching him the lyrics of ‘Nakudata’. Rude Boy could be seen in the video attentively listening as Weasel sang the Luganda lyrics.

It is not clear yet whether the two will use the short period during Paul’s stay to go to studio. 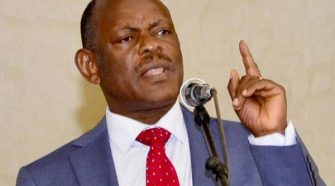