The Prime Minister, Dr. Ruhakana Rugunda has refuted claims that article 102(b) that bars the head of state from standing after the age of 75 was smuggled into the Constitution.

Rugunda while appearing before the legal and Parliamentary committee chaired by Gomba West MP Robinah Rwakoojo said that it’s true he was an MP in the Constituent Assembly and he doesn’t remember any Article that was illegally included in the constitution.

Rugunda said that as far as he is concerned all Articles were debated and passed.

“To me the constitutional provisions were thoroughly debated and passed and the Constitution as a whole was passed,” Rugunda said.

Last week the NRM deputy Secretary General Richard Todwong surprised the same committee and the entire country when he said that the reason the ruling party wanted the contentious Article amended is because “it was smuggled into the constitution”.

On the other hand, Rugunda faced hard time to explain to legislators on the committee the difference between limitation and discrimination as it was one of the basis for his support to remove the article in the constitution.

Asked what has changed since the Constituent Assembly found it imperative to have the minimum and maximum age limitations for one to be President, Rugunda said that politics and people’s views had changed.

“My opinion is that many things have changed both in the NRM and politics. Views change, thinking changes, people’s age changes, and, therefore, it is not a surprise that after 20 year of the constitution, there is consideration and reconsideration of some of these issues,” the Prime Minister told the committee.

Rugunda went on to say that; “So, I think in this particular issue of age limit, it would be unfair to the country to say somebody should not stand for President because he or she is 35 years and below”

He said that by maintaining age caps in the constitution, the country may lose intelligent, able, young and old people competent enough to lead.

“Age is not the best determinant for performance. People are able to perform differently. One can make a general statement that one becomes senile at old age, but some start at a young age,” Rugunda said.

Bugweri MP Abdu Katuntu asked the Prime Minister to explain why there are different standards for civil servants and politicians to retire.

Rugunda told the committee that the issue of retirement and returning term limits in the constitution should be left to the will of people. 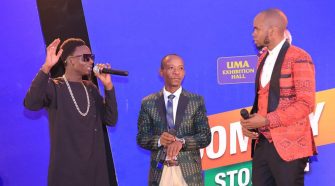