Deus Mubiru Mukalazi a Research Associate in Democracy and Rule of Law at Great Lakes Institute for Strategic Studies (GLISS) has run to the High Court in Kampala challenging the new guidelines that were issued by the Minister of Local Government, Raphael Magyezi on the operationalisation of the newly created cities in the country.

On June 30th, 2020, the Minister in line with Section 95 of the Local Governments Act Cap 243, issued new guidelines on how the seven new cities should be operated.

According to the directives by the Minister, the former municipality mayor elected by universal adult suffrage assumes the positions of the interim city mayor subject to section 12(2) of the Local Governments Act Cap 243.

The interim mayor was mandated to nominate among the members of the council an interim deputy city mayor and interim executive committee.

In a miscellaneous cause No 151 of 2020 filed on July 1st, 2020, Mukalazi wants court to declare that the guidelines that were issued by the minister are illegal and ultravires for flouting both the procedural and substantive law.

Mukalazi as well faults the Minister for attempting to amend the Local Governments Act following the directives he issued on June 30th, 2020. 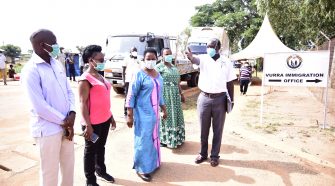