Uganda’s Minister of Foreign Affairs, Sam Kutesa has revealed that authorities in Rwanda have in their latest move denied Uganda’s goods access into Rwanda.

He was in a statement responding to social media reports indicating that Uganda has closed her borders with Rwanda, describing the allegations as untrue.

On February 28, Rwanda issued an advisory against travel of her nationals to Uganda including students who on a daily basis cross, for studies. The Rwandan government said at the time that the advisory was done to ensure their safety.

But, according to Kutesa, since the blockage was effected by Rwanda, the “flow of traffic from Uganda to Rwanda has been continuing normally.”

He says Ugandan exports to Rwanda have been prohibited by Rwandan authorities, whom he says “are only allowing crossing into Rwanda those trucks carrying transit goods destined for Rwanda or transiting through Rwanda to the Democratic Republic of Congo and other places.”

“Goods from Rwanda and Rwanda registered trucks are not being allowed to cross over from Rwanda into Uganda by Rwandan authorities,” Kuteesa says.

He adds that Rwanda has gone ahead to introduce an export permit system for her nationals intending to export goods into Uganda.

This is a technical and non-tariff barrier to trade, to which there are no successful applicant. In effect, this is a trade embargo on bilateral trade with Uganda, he says.

On the activities at the border points since the start of the impasse late February, Kutesa says 41 transactions have been processed at Cyanika border in Kisoro District, 311 at Mirama hills and 85 at Katuna.

He however reiterates that for the case of Katuna, only light vehicles are allowed to cross through to Rwanda.

Kutesa says despite the restrictions on the movement of people and goods from Rwanda destined to Uganda, Uganda authorities have not restricted any movement of goods and people from Uganda into Rwanda.

He cites regional and continental frameworks which provide for free movement of people and goods across borders, saying Uganda’s decision is in line with obeying those obligations. 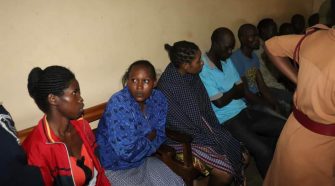