The government of Rwanda has finally broken silence on the move to prevent their citizens including traders and school children from crossing to Uganda since Wednesday.

Rwanda on Wednesday blocked cargo trucks from Uganda from crossing to Rwanda through the Katuna border point due to the ongoing constitution works, according to Rwanda tax body (RRA).

The trucks were diverted to Kagitumba and Mirama hills, both other crossing points into Rwanda. It would later be established established that they were equally blocked.

Uganda government spokesperson, Ofwono Opondo, told the country that Rwandan authorities had also stopped their citizens and school children coming to Uganda from proceeding at all the three border points.

He said all this was happening without any official communication from the Kigali administration, revealing that government had scheduled a meeting with Rwandan ambassador to Uganda, Maj Gen Frank Mugambagye, about the matter.

Sezibera on Friday said in a tweet that the blocking is intended to ensure the security of their citizens.

“As explained to many journalists, all Rwanda’s borders are open. Trucks and heavy vehicles are advised to use Kagitumba due to ongoing construction at Gatuna,” reads Sezibera’s tweet in parts.

“Rwandans are strongly advised NOT to travel to Uganda due to ongoing arrests, harassment, torture”

“Incarceration without consular access, deportation etc.This is for their own security. Ugandans in Rwanda or travelling through Rwanda are safe,” he adds.

But in his address to the media today, Ofwono Opondo said that there is no Rwandan national who was unlawfully arrested in Uganda, saying government has no intentions of harassing them.

“We have no policy or practice and there is no witch-hunt against Rwandans in Uganda,” said Ofwono.

He said Rwandans in Uganda are doing their activities normally as they have always done for decades.

The government spokesperson also said that there is no Rwandan national in Police custody outside the jurisdiction of the law and that if there is one, he/she has been processed through the police and Judicial system.

“There is no Rwandan citizen who is being held in Uganda’s prisons on political reasons whatsoever. If there is anybody who knows such a person, we will be glad if that information is shared with Uganda, so that we find out his identity and who is holding him,” he added

He said Uganda has no intentions of witch-hunting as well as harassing any Rwandan citizens who are living and having various activities in the country. 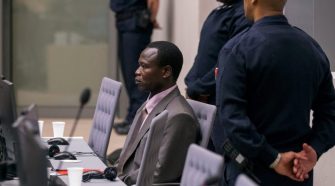