Rwanda has moved to block all cargo trucks from Uganda and Kenya destined to Burundi over allegations that the latter no longer allows-in such trucks. Burundi has not made communication to that effect in the media.

Authorities in Rwanda claim that the Government of the Republic of Burundi is no longer allowing cargo trucks from Uganda and Kenya transiting through Rwanda to enter Burundi’s territory.

Kigali claims that there are currently many heavy trucks with goods containing Ugandan and Kenyan registration numbers they had cleared, stuck in the no-man’s land between Rwanda and Burundi.

Burundi has not communicated any blockade yet and there is at least no evidence that Rwanda has reached out to Bujumbura on the same. Authorities in Rwanda are not providing evidence to back up their conclusion on the matter.

Rwanda has, however, gone ahead to formally notify Uganda and Kenya that Kigali is no longer allowing in trucks headed to Burundi from these two countries. The decision was communicated in the Notes Verbale sent to Kampala and Nairobi by Rwanda’s Foreign Affairs Ministry.

A note Verbale is a diplomatic note written in the third person, of the nature of a memorandum but sometimes considered to be more formal.

“As of 30th March 2020, there are twenty three (23) cargo trucks stranded at various border points due to the fact that cargo trucks transiting through Rwanda are being denied entry into Burundi by the government of Burundi. Therefore, the Ministry of Foreign Affairs and International Affairs of the Republic of Rwanda wishes to communicate to the concerned institutions in the Republic of Uganda including customs offices, that since Burundi has effectively closed all its borders to cargo transiting through Rwanda, the Government of Rwanda will no longer allow entry on its territory to cargo trucks destined to Burundi,” reads Rwanda’s Notes Verbale in part.

However, Rwanda’s allegations and consequential decision, have been dismissed by several officials in Burundi who say that there is no “substance and truth” in the claims, asserting that President Kagame and the government of Rwanda are only pushing for selfish and ill-motivated interests against Bujumbura.

“Kigali seeks to deny Burundi essential supplies and suffocate our country into submission, but be the first to distance Rwanda from their ill motives through media propaganda and note Verbales to other East African Community Partner states,” a top government official in Burundi told this news website on Thursday.

He said Rwanda is in dire need of foreign currency and that this is the reason for their blocking of cargo headed to Burundi from Uganda and Kenya.

“They want to force us to buy Rwanda products yet many of the products sold in Rwanda are not locally made in Rwanda. Rwanda used to buy from Uganda but ever since they closed borders to all products made in Uganda, they import from Kenya and China. When you factor in transport costs of importing from thousands of kilometres instead of neighbouring Uganda, essential supplies including food end up very expensive. So they are blocking our cargo from Uganda and Kenya from transiting through Rwandan territory,” he added.

“Rwanda conceives ill motives against East African partner states, execute them and then be the first to project themselves as victime and other countries as aggressors. The truth is Kagame, ironically the current Chairman of East Africa, is blocking regional trade and killing the East African community,” the official explained.

The official said, Burundi will officially respond to the claims soon.

Rwanda’s move to block entry of cargo trucks from Uganda and Kenya goes against a resolution by Ministers responsible for Health and EAC Affairs on the same taken during their sitting on March 25. The meeting was convened via video conferencing, to devise means of stemming out further spread Covid-19 in the region.

The Ministers resolved that free movement of goods and services in the region continues and agreed to facilitate it. As such, they directed all Partner States to ensure that trucks carrying goods should have only 2 – 3 crew members per vehicle to facilitate smooth border crossing in the region.

They also guided that truck drivers are required to declare their final destination and are urged to stop only at designated points along the transport corridors so as to limit chances of spread of Covid-19 during transit.

President Paul Kagame of Rwanda is the current Chairperson of the East African Summit, the top most organ of the regional bloc and his country’s Minister of Health Daniel Ngamije chaired the March 25 meeting. The Burundian official wonders why Kagame and Ngamije did not use their authority under the EAC to bring Burundi to book “if at all Burundi had violated the regional guidelines other than resorting to Kigali’s usual media propaganda.”

In December last year, the President of Burundi, Pierre Nkurunziza said the Rwandan government deliberately seeks to destabilize countries neighbouring Rwanda and had since 2014 been supporting armed groups against these countries, including Burundi.

The President made the remarks while delivering his end of year address in the capital, Bujumbura.

He said authorities in Burundi had stopped several trucks from Rwanda transporting weapons to Burundi and that they had thousands of weapons and fighters from Rwanda whom they had all presented to the local and international community.

It should be remembered that in November last year, Rwanda carried out an attack on military positions of the Burundian army located on the Twinyoni mountain in Marura, Mabayi, Cibitoke Province Northwest of the country, killing an unidentified number of Burundian soldiers as well as injuring dozens.

However, Nkurunziza in December revealed that they did not only have evidence of the November attacks by Rwanda, but many of them dating back from 2015.

President Kagame has not chaired a single summit of the East African Heads of State, ever since he took over the rotational Chairmanship of the regional bloc. 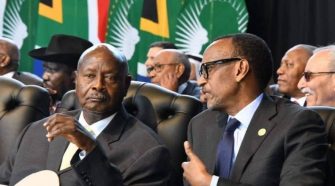 Museveni, Kagame to Meet Again for Talks in Angola