NTUNGAMO- Rwandan authorities have Thursday deported 13 Ugandans who have been in detention in Nyagatare Prison, SoftPower News has learnt.

The 13 individuals, all male, were deported through Mirama Hills in Ntungamo District and were received by the RDC of Ntungamo.

According to a source in Rwanda, the Ugandans had at separate times entered Rwanda some time back through the two countries before the existing lockdown to do petty businesses like sell of much needed food items in Rwanda but were arrested on account of illegal entry and detained.

Out of the 13, only four are residents of Ntungamo district. The rest come from Kabale and Rukiga district.

The Ugandans have narrated that they were confined at Nyagatare Prison where they were separated from other inmates of Rwandan nationality.

“I am happy to be back home,” one of the deported Ugandans told a source in Ntungamo.

“Today at around 2pm I got a phone call when they were already around the Mirama Hills border post and I spoke to the immigration offices and I asked them to receive our Ugandans. They were received and remained their until I drove to the border and formerly received them,” Bakunda told this news website on Thursday evening.

Asked how much time the Ugandans spent in detention, the RDC said that since they were arrested on different days, some had spent a longer time while others a month in detention.

After receiving them, Bakunda says, they transferred to Ntungamo Health Training Institute at Nyarutuntu where they have been put under quarantine which will last 14 days. They will be monitored to rule out COVID-19 infection. He said samples will be picked from them on Friday and sent to the Uganda Viral Research Institute for formal testing.

However, a source in security has told SoftPower News that Rwanda had not formally informed Uganda of the detention of the 13 Ugandans in a Rwandan prison.

“We were not formally informed by Rwanda and the RDC should have contacted security instead of receiving them on his own. While all Ugandans are welcome home, there are guidelines to be followed,” he said.

It is not clear how many more Ugandans are still in Rwanda’s prisons as several were arrested at the height of the two countries tense relations, and detained for crimes as petty as sharing food with relatives across the shared border. 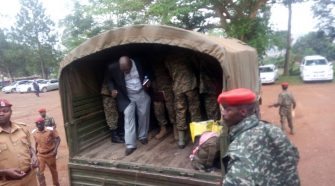