Authorities in France have Saturday morning arrested Félicien Kabuga, one of the world’s most wanted fugitives who is alleged to have been financed the 1994 genocide against the Tutsi in Rwanda.

Following completion of appropriate procedures under French law, Kabuga is expected to be transferred to the custody of the Mechanism, where he will stand trial.

According to the United Nation’s International Residual Mechanism for Criminal Tribunals (IRMCT), police arrested Kabuga in a sophisticated, coordinated operation with simultaneous searches across a number of locations.

“He was arrested following a joint investigation with the IRMCT Office of the Prosecutor,”  Mechanism Chief Prosecutor Serge Brammertz said in reaction to the arrest.

“The arrest of Félicien Kabuga today is a reminder that those responsible for genocide can be brought to account, even twenty-six years after their crimes. Our first thoughts must be with the victims and survivors of the Rwandan genocide. Advocating on their behalf is an immense professional honor for my entire Office,” said Brammertz.

“For international justice, Kabuga’s arrest demonstrates that we can succeed when we have the international community’s support. This result is a tribute to the unwavering commitment of the United Nations Security Council, which established the Mechanism to continue the accountability process in Rwanda and the former Yugoslavia,” he added. 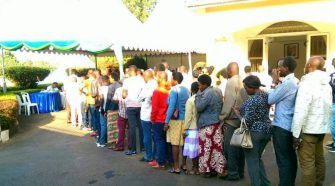