A man was Monday shot by Rwanda military who were trying to pursue him as he ran towards the Ugandan border.

The incident occurred on Monday at Mushere Village in Nyagatare district near the Uganda – Rwanda border.

Reports state that a Rwandan man identified as Nayizimana Olivier in company of another Rwandan was carrying bananas from Uganda.

The two met Rwandan Defence Forces (RDF) soldiers who tried to stop them.

The civilians refused to stop and instead dropped the bananas and ran back towards the Ugandan border.

In the process, the Rwandan soldiers shot and injured one in the right arm.

The two continued running, crossed River Ekyambu until they got to the Ugandan side of the border at Kigando where the injured received First aid before being taken to hospital.

Neither the Ugandan nor Rwandan authorities have issued a statement on the incident. 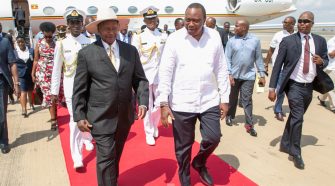