Police in Uganda have increased their presence at all border points with Rwanda, in a bid to secure commodities and merchandise of traders that remain stuck on the Ugandan side.

Authorities in Rwanda stopped over 130 Uganda’s cargo trucks from crossing through Katuna border on Wednesday night until today, citing ongoing construction works. The cargo was diverted to use the alternative routes of Kagitumba in Mirama hills.

It was later established that even Kagitumba and Kyanika (another crossing point) in Kisoro district were as well blocked, and no cargo truck from Uganda would be allowed to enter Rwanda.

On Friday, government spokesperson, Ofwono Opondo said “the Commissioner of customs of Rwanda came to Katuna border post and we made a request that they allow the 129 trucks that were already at Katuna to go through, so that the rest of the trucks still on transit can be diverted from Ntungamo, they declined this request and so, the 129 trucks are still there.”

The situation has remained the same despite reports that some few trucks had been cleared at Kagitumba over the weekend. Many of the truck drivers and traders say they have encountered huge losses and worse more, according to them, the hope to resolve the standoff soon is far-fetched.

Police said Monday that they are concerned about the safety of the stranded traders and their goods, and that this explains why more officers have been deployed across the three border points.

“We have maintained visibility on the Ugandan side. Of course there is no threat that we are facing, but we are simply concerned about our business persons especially those who are ferrying perishable goods,” Enanga said while addressing reporters on Monday.

He added that the matter is being handled at diplomatic and political levels but added: “Ours as security is to ensure that these many trucks that are stranded are protected.”

Enanga further cautioned media in Uganda especially online publications against what he called “sensational” reporting with an intent of exaggerating the situation.

He said the situation is not out of proportion, before advising the press to report in a balanced manner.

The Police Spokesperson says there are indicators that Katuna and Kyanika will be opened soon for normal business to resume.

“The good news we are getting from the engagements, our colleagues are indicating that soon, the commercial trucks will be getting access to Rwanda,” said Enanga.

Also, Uganda’s customs authorities have written to their counterparts in the neighbouring country to at least allow the clogged up traffic at Katuna entry point, saying their notification was done on short notice yet most of these trucks had already arrived. Rwanda hasn’t responded yet.

Meanwhile, even on Monday, Rwandan nationals including primary school and Kabale University students were reportedly still blocked from crossing into Uganda for studies, by Rwandan authorities.

Rwandan government spokesperson and Foreign Affairs Minister, Richard Sezibera last week said, the move to stop their citizens from coming to Uganda is for their (citizens) own security. He alleged that several of the nationals are detained in Uganda or deported without consular services.

Asked about the same today, Enanga refuted allegations regarding arrests of any Rwandan nationals, a response synonymous to that of Ofwono last week.

Opondo said that “there is no Rwandan in Police custody outside the jurisdiction of the law, and if there is one, he/she has been processed through the police and judicial system.”

In the recent past, police said Rwandans deported to Kigali had been operating under cover to compromise Uganda’s national security. 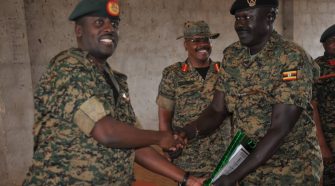