There is growing uncertainty within Rwanda as several youths flee the country while others are making attempts to cross into Tanzania in fear of what they say is a recruitment of youthful Rwandans into the military, sources have told SoftPower News.

The young men are fleeing the country saying they sense there is something big likely to happen in the coming days. Some of those that spoke to this news website in Tanzania said the Rwandan army had deployed heavily at the border points to block them but they managed.

“Gen Nyanvumba was in China to procure Air defense systems from NORINCO company. After he came back, he was tasked to mobilize and recall veterans who have been in the reserve force, but the response was very bad which has annoyed the Commander- in -Chief,” an RDF soldier said.

Now, the soldier says, the military in Rwanda has resorted to forceful recruitment of youths into the army. That was after the high command was divided on closing the Uganda border.

The seemingly tense atmosphere in Rwanda comes in the wake of growing animosity in relations between Rwanda and Uganda. There has recently been a diplomatic row between the Kigali and Kampala administration, sparked by the closure by Rwanda of the main border at Katuna over two weeks ago.

The closure left over 100 trucks loaded with cargo stuck at the border causing a customs paralysis for over a week. The cargo was diverted by Rwandan authorities to alternative routes of Mirama hills and Kagitumba. However, these border points too had been closed.

In days that followed, the Foreign Minister for Rwanda, Richard Sezibera said the government was strongly advising Rwandans against traveling to Uganda, lest they would face arrest and deportation detention.

These claims were re-echoed by President Kagame recently while speaking at the National Leadership Retreat in Gabiro. He said the only way Rwandan nationals can be guaranteed security in Uganda is if they are against Rwanda.

Kagame also accused the government in Uganda of working with elements affiliated to Rwanda National Congress (RNC) which is considered as harbouring ‘terrorist’ intentions towards Kagame’s government. RNC refutes the allegations saying they are a political party.

The Rwandan President warned that nobody can bring him to his knees and that Rwandans should not let that happen either.

Whereas many have appealed for a diplomatic solution, involving dialogue between Presidents Museveni and Kagame, some observers have interpreted Kagame’s recent gestures as bearing indicators of aggression.

It is likely that it is these signals that have led to the uncertainty referred to by some of the youths who have now fled their country into Tanzania.

One of them said: “I have escaped, I thank God. I don’t want to be a soldier. They are forcing us to join RDF. I am now going to Zambia. Some of my friends have decided to go to Mozambique”.

Asked which border he used, he said the only remaining exit is Rusumo, a town in Kirehe district in the Eastern Province of Rwanda.

“It is risky to go through the Ugandan border. RDF soldiers are everywhere, they arrest everyone who attempts to cross. Rusumo border point was the only chance and I thank God for making it,” the youth said.

Another person (who managed to escape) told SoftPower News that there is a big influx of youth running away.

“We came with Trinity buses through Rusumo but now, the RDF guys have started blocking others from crossing.”

Asked why they are running away, another young person said they were being forced to enlist in the armed forces and that they fear “something unusual” is about to happen.

Meanwhile, sources say the RDF and Police deployed at Cyanika and Mirama hills borders have run shot of food and are sending civilians to cross to Uganda to buy posho and other food stuffs.

Maj Havugimana has been deployed at Kidaho and Lt Silive Kamanzi at Kinyababa, the opposite side of Murora sub-country in Kisoro district and they are commanding a coy and a platoon to stop food from entering Rwanda from Uganda.

Reliable sources however say Rwandan security forces guarding border points are defying their President’s directives not to allow Rwandans to cross to Uganda to buy food. Some soldiers are said to be extorting as much as 2,000 Francs per individual both at the Kagitumba and Cyanika borders to allow citizens cross into Uganda for food and other necessities.

“The market in Kisoro distict, in Uganda which borders with Rwanda is always full of Rwandans despite the travel ban against us,” a source told us.

Another source told SoftPower News that there was an RDF Colonel at the border inspecting the troops but the troops told the Colonel that they have not had meals for four days.

There are also reports that Gen Patrick Nyamvumba is planning to leave the country. 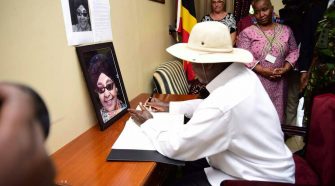