KIGALI – Rwandan high court on Thursday acquitted a leading opposition leader of charges of inciting insurrection and forgery, saying the prosecution was unable to provide enough evidence against the accused.

Diane Rwigara had insisted charges brought against her by the State were politically motivated aimed at silencing her from exposing human rights violations committed by the government.

Her 59-year-old mother, Adeline, who has been facing charges of inciting insurrection and promoting sectarianism, was also acquitted.

The court in the capital, Kigali was Thursday fully packed by Rwigara’s supporters and sympathisers.

The decision was greeted with excitement. Supporters hugged each other before family members said prayers to thank God.

The Judge ruled that the charges of inciting insurrection and forgery do not hold since there is no proof that Rwandans were incited against the State by statements she made in the media.

On the charges against Adeline, High Court ruled that the intercepted WhatsApp audios of Adeline Rwigara, which were presented by prosecution as evidence, do not prove promotion of sectarianism or inciting public insurrection.

Court ruled that these were private conversations between individuals.

The prosecution had requested a 22-year long sentence for both Diane Rwigara and her mother.

Diane Rwigara was the only female Presidential candidate in last year’s election that President Paul Kagame won with almost 99% of the vote.

The electoral commission said Rwigara inflated the number of signatures needed to qualify and accused her of submitting the names of dead people, charges Rwigara denies.

The judge ruled that those who collected signatures on behalf of Rwigara are the ones to blame not her.

Rwigara who tried to challenge the longtime President had said no amount of pressure would silence her.

Rwigara’s case has attracted international attention as some Senators in the U.S have called on the government to drop the charges against her.

Senator Dick Durbin said in a tweet last week that he was “troubled by what appears to be highly questionable charges against Rwigara for seemingly running for office peacefully.” 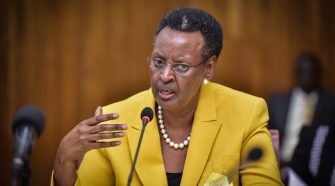