It is not yet established where the visiting primates originated, the UWA Communications Manager, Bashir Hangi told SoftPower News.

He said the gorillas have been in Uganda for about two weeks. Though with no certainty, Hangi said the visiting group totals to about 8.

Asked to comment on media reports that the gorilla group crossed from Rwanda, Hangi said: I don’t know where they came from. What I can confirm is that we have a visiting gorilla group which doesn’t belong to us”.

Mgahinga national park located in Uganda’s Kisoro district is part of the Virunga Massif, a chain of 8 volcanoes that span across Rwanda, Uganda and DR Congo covering 3 national parks.

Bashir Hangi told this news website that gorillas migrating across the three countries that form the Virunga massif is a not a new phenomenon.

“It happens. Such migrations happen,” he said, adding that “I do not know what the push factors are”.

When this website contacted Sam, the Warden In charge of Mgahinga national park, he could not divulge details and instead referred us to the UWA Kampala office.

Mountain gorillas have been the flagship tourism activity not only for Uganda but even for the neighbouring countries DRC and Rwanda.

Recently, the number of bookings for gorilla permits in Uganda has largely increased, according to tour operators, largely due to the efforts of the aggressive destination marketing by the 3 PR firms in North America, UK and German speaking countries.

Mountain gorilla are highly social, and live in relatively stable, cohesive groups held together by long-term bonds between adult males and females.

These groups are nonterritorial; the silverback generally defends his group rather than his territory. In the Virunga mountain gorillas, the average length of tenure for a dominant silverback is 4.7 years.

The dominant silverback generally determines the movements of the group, leading it to appropriate feeding sites throughout the year. He also mediates conflicts within the group and protects it from external threats.

Virunga massif is habitat to both habituated and unhabituated mountain gorillas. According to computer modeling of their population dynamics, groups of gorillas that were habituated for research and ecotourism have higher growth rates than unhabituated gorillas.

Habituation means that through repeated, neutral contact with humans, gorillas exhibit normal behavior when people are in proximity.

Habituated gorillas are more closely guarded by field staff and they receive veterinary treatment for snares, respiratory disease, and other life-threatening conditions.

Nonetheless, researchers recommended that some gorillas remain unhabituated as a bet-hedging strategy against the risk of human pathogens being transmitted throughout the population. 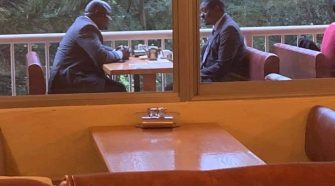