The Minister of State for Finance, David Bahati has revealed that government will in the month of April send a delegation to South Sudan to carry out a joint verification exercise of Ugandan companies that claim to have supplied goods and services to South Sudan and were never paid.

While appearing before the Parliament select committee chaired by Kyankwanzi Woman MP, Anna Maria Nankabirwa, Bahati said the delay in payment of Ugandan traders that lost their goods in South Sudan has been due to the failure by the government of South Sudan to send a verification team as earlier agreed.

Bahati said all companies that claim nonpayment can only be paid after the government of South Sudan has confirmed and issued sovereign guarantee to Uganda on the said companies.

Bahati said that in 2016, President Museveni together with his counterpart, Salva Kiir of South Sudan signed a bilateral agreement where Uganda committed itself to offer a loan of Shs150bn to South Sudan that would be used to pay off the claimants.

A total of 10 companies have so far been paid by Ugandan government to which the Minister said that those were the companies that had direct MOU with the government of South Sudan.

“The basis of the bilateral agreement was on 10 companies totaling to USD 41.6m and that was the gist of the agreement. But we said No, because we knew that there are other companies that are in the same circumstance hence making a provision that these companies first be verified so as to benefit from the compensation,” Bahati said.

Asked to speak on allegations that the Ministry of Finance has since manipulated the list of companies to benefit from the compensation, Bahati said that he could not tell the exact total number of companies claiming for payments.

He said the genuine list remains with the Ministry of Trade since it is the same Ministry that has been compiling it for the last two years. 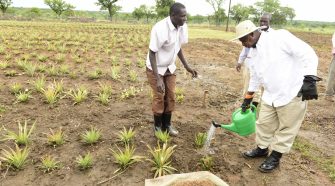